OVER THE HILLS AND FAR AWAY

I dedicate today’s post to the memory of my mother who would have turned 87 today. She loved St. Patrick’s Day and was proud to be an Irish-American.


I wonder which window it was, I thought, as we looked out at the sagging sashes of the dilapidated little yellow house.

In the fall of 1992, I took my mother to Chicopee, Massachusetts to visit her birthplace, the former home of her grandmother, (my great-grandmother) Catherine Ahern Linehan. I had become obsessed with my family history and I asked her to come with me in the hope of jogging her memory and learning more about my maternal roots.

As we sat in the car looking out at my great-grandmother’s home, my mother shared a disturbing story with me:

“Sometime around 1893,” she said, “My mother’s 14-year-old sister Ann was trying to open a stuck window in this house. Try as she might, she couldn’t get it open. They say that she pushed so hard that she burst a blood vessel in her brain. Because it was the late 19th century, the doctors could do nothing for her. She lingered in bed for days and slowly bled to death”.

Ann’s younger sister Bridget (my grandmother) sat vigil at her deathbed. Bridget tried to pray but she was distracted by the sack of candy that hung on the back of Ann’s door. She couldn’t wait to get her hands on these confections and because of this, wished her sister a speedy death. By the end of the week she had her wish.

As we drove away from the little yellow house, my mother told me how her mother always hated the name “Bridget.” It seems as though, New England Yankees used to use the name “Bridget” as a synonym for their Irish servant women (i.e. Mrs. Cabot asked Mrs. Lodge, “How many Bridgets do you have working in your mansion.”) She insisted on being called “Bessie” apparently not realizing how many farmers had given their cows this same name.

I held my mother’s arm as we trudged through Calvary Cemetery in Chicopee. We were looking for my Great-Grandparent’s gravestone. As we searched she told me about her Grandmother Linehan. She was only seven-years-old when her Grandmother died but she remembered her fondly.

“I can still picture her wrapped in a shawl, knitting while huddled around the wood 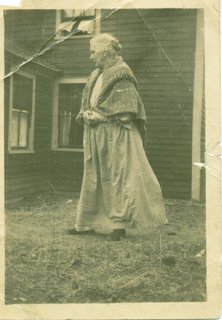 burning stove in her kitchen. She was a very devout Catholic and when she wasn’t knitting she was praying the Rosary. She was a kind-hearted person,” she continued, “ I like to think that I inherited my grandmother’s personality and not my mothers.”

Apparently my Great-Grandmother Linehan did not have an easy life. She was born Catherine Ahern in County Cork, Ireland. As a young girl she immigrated to Boston to escape the great hunger of the potato famine. She found a job working in a cotton mill in Chicopee and at the age of 23 married John Linehan. He also was an Irish Immigrant, who by all accounts, was a stern disciplinarian who drank too much.

They had ten children and only four grew to adulthood. Margaret, their seven year old daughter, died of pneumonia at the tender age of seven. Their only son John Jr., inherited his father’s love of the drink. He ended up destitute, homeless and dying of Tuberculosis in 1910 at the age of 30. They say that the ragman carted him back to the little yellow house into the arms of his despondent mother.

She was quoted as saying, “My son has finally come home…to die.”

After walking past several rows of granite tombstones, we finally found my great-grandparents grave. Their daughter Ann (the window opener) is buried with them. The gravestone is surprisingly ornate and modern looking.

Standing at the gravestone stirred something in my mother’s memory. She said, “When Grandmother Linehan died,” her last words were… “Over the hills and far away.”

”These words painted a mental picture for me. I envisioned my Great-Grandmother on her deathbed. Her last thoughts of being a young girl, running through the peat-covered bogs and fields of her native Ireland. She ambles up the green hills and runs into the arms of the God that she so fervently prayed to. 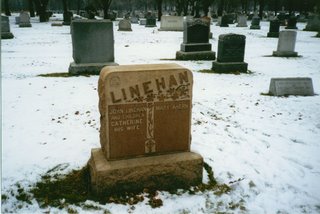 May the roads rise to meet you.May the winds be always at your back.
May the sun shine warm upon your face;
The rains fall softly on your fields and until we meet again;
May God hold you in the palm of His hand.

Sniff, sniff...those Irish Blessings always get to me! Throw in the bagpipes...and I'm gone!

A psychic once told us that your Mom's spirit spends a lot of time "hanging out" with us in our new home...I suddenly feel the need to go buy a bouquet of green carnations (and a box of tissues).

Happy Birthday Kay!
We love you and miss you!

Grandma always wanted to change her name to either Ursula or Imelda. One was her middle name and she just liked the other one.

Happy birthday, Mom! We all miss you. Bobby, this was a beautiful story.
Eileen

Mom would be quite pleased with your "blogging", especially since you have included her memory.

I ran into some of Kay's "girls" on St. Patrick's Day. They all still donned the green tams and their blue sweatshirts with the shamrocks on them. However, they did mention that it was not quite the same since Mom's passing (or without the limo ride).