It's Not Easy Being Me

There it sat, an abandoned navy blue knapsack, planted smack dab in the middle of the Hudson News emporium.

The store is huge. In addition to newspapers, it sells almost every magazine in print, paperback books, warm soda and snacks.

A candy-laden cashier’s booth sits at the hub of the store. Here, no less than four Pakistani cashiers impatiently scream out… “Next!”.

I eye the cashiers suspiciously.

A bomb-sniffing German Shepard is now upon the knapsack. He stands on his hind legs, poking his long nose inside the zipper of the bag.

“That’s it boy,” says a Metro North Police officer, now pulling up on the leash with one hand, while dragging the bag across the floor with the other.

The harried commuters seem oblivious to the dramatic scene that is unfolding before their eyes. I know what they’re thinking; I can see it on their faces… “What kind of idiot would leave a bag in the middle of Grand Central?”

The German Shepard lifts his snout from the bag, looks up at me and tilts his head.

“Yours?” The officer seems incredulous at first, and then, with a slight smirk on his face again asks, “YOURS?”

“Yeah, Yeah, I know,” I said, “I was in here about 10 minutes ago buying a soda. I was carrying my briefcase and this knapsack and I guess I just forgot…”

“It’s just kind of ironic,” said the officer. “Of all the people to leave a bag behind, (like Vanna White, he runs an outstretched hand up and down the length of my uniform) it’s a conductor. Ha! Ha!”

I could feel my face turning red from embarrassment. I quickly grabbed my bag and tried to make a hasty exit. I almost made it out the door when I heard the officer shout…

Hey! Conductor! I need your name and employee number for my report!

So much for the quick exits.

This was the third time in as many weeks that I left my gym bag behind. Two weeks previous to this experience, I left my bag on the train in New Haven. Luckily, a mechanic found it and turned it into “Lost and Found.” The same day I recovered the bag, I left it on the train again.

My wife often asks, “How is it that you can remember the most trivial of trivia, but you can never remember where you put your stuff?”

On Friday, just outside the doors on Grand Central, there was an Earth Day Concert featuring Jon Anderson of the legendary rock group"Yes."
Jon's was backed by a group of kids from "The Paul Green School of Rock." They're an incredibly talented group of kids, aged 13-16, who weren't even born when the songs they were playing were originally recorded. They were so good, that if you closed your eyes, you would swear you were listening to "Yes."

The lead guitarist was a fifteen-year-old girl named Sarah Zimmerman. Her playing style reminded me of Bonnie Raitt (a lot of sliding up and down the neck of the guitar). I predict that she'll be a big star someday.

My brother Brian turned me onto "Yes" back in the "70's," so it was very fitting that I ran into him in the crowd. We both agreed that it was one of the best shows we had ever seen, and ...it was FREE! 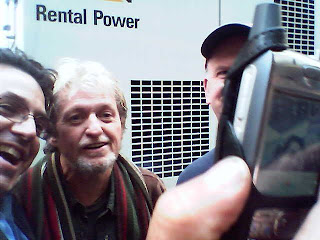 After the show, Brian and I went backstage where I asked Jon Anderson to take a picture with me. He told me to make it quick because they had to go to lunch. He reminded me of a kindly, elfin, college professor.
Just as Brian snapped the picture, some random dude ran up with his Blackberry and took a picture, (that's me behind the Blackberry.) Unfortunately, Brian couldn't figure out how to take another shot (he was using my cellphone.) Jon apologized and said he had to move on. Obviously, he didn't know he was with the "Conductor to the Stars."
Here's a link: http://www.youtube.com/watch?v=Uxks-PWvY0w
Posted by Bobby at 8:51 PM 1 comment:

In Search of "Oscar"

Yeah-Yeah I know, I haven’t written in a while, it’s just that after almost 21 years on the railroad, my seniority finally allows me to hold a good “day job.” This means that I now wake up at the ungodly hour of 5:30 a.m. That may not sound bad to you, but I’m more accustomed to going to bed at this hour… not waking up. It’s been quite an adjustment, and I really haven’t found the time or inspiration to write.

Most day jobs on the railroad have something called “swing time” built in. This is a sort of job recess that gives employees time off in the city (usually three of four hours between trains.) The railroad likes swing time because it allows them to hold conductors and engineers over from morning rush hour, to evening rush hour at a reduced rate of pay.
This down time may sound sweet, but believe me…it gets old quick.

Some employees spend their swing time playing poker; others go to the gym and work out, while still others get part time jobs. I, on the other hand, spend my time researching genealogy at the library on 5th Avenue, or take sightseeing walks on

the streets of Manhattan. It was on one of these walks recently that I went “In search of Oscar.”

Every year my younger daughter “C” has a sleepover birthday party.
These parties have become a big social event amongst her friends. Part of the reason these parties are so popular is my wife (who is very creative) puts a lot of planning into them. Each year my daughter’s party has a theme. Past year’s themes were: Harry Potter, Penguins, Hello Kitty and a Hawaiian Luau. This year’s theme was “Movie Night,” an evening that was a cross between The Academy Awards ceremony and a traditional teenage sleepover.

A few weeks before this year’s party, my wife ordered a bunch of party supplies from “The Oriental Trading Company” catalogue. She purchased a red carpet runner so that the girls could make a grand entrance into our family room. They would enter the party room through a gold Mylar curtain that hung from the family room threshold. There, other girls acting as paparazzi, would take snapshots of arriving guest as my wife asked: “Who are you wearing?”

All these decorations gave our house that old time Hollywood premiere look, but one thing was missing…Oscar. My wife had ordered several small plastic Oscar statuettes as party favors, but when the order arrived, there was a note saying that the statues were out of stock and discontinued until further notice. “Not to worry,” I said, “I’m sure I can find them at some specialty/party shop in New York.”

The next day I asked my fellow conductors if they knew where I could find little plastic Oscar statues. Keith, a fellow conductor, told me to look in the Garment District. “W 38th St. is full of little shops that specialize in selling cheap souvenirs like that,” he said.

On 36th St. I found a store called “Spandex World.” The sight of this store made me think of the “Physical” video by Olivia Newton John. I hummed this song for several blocks until I walked by “Leather World,” and I quickly changed my tune to “YMCA” by the Village People. I was really getting into it, and I had to fight the urge to do the semaphore arm gestures that usually accompany the song.

After trudging all over the West 30’s I decided that “Oscar” wasn’t in the Garment District and I took a subway down to Chinatown
(The cheap crap capital of America.) When you walk up the subway stairs to Canal Street, several Asian women selling “knock off” designer handbags, perfume and sunglasses usually accost you. “Chanel…Gucci…Prada,” they shout out in broken English.

I asked a young Chinese woman, “Do you know where I can find little plastic Oscar statues?

“No speak Engrish,” she said.

“Statue?” Another woman asked, “We have statue.” She then led me into a tiny shop where several Statues of Liberty were displayed. There were also three shelves of Buddha statues, each in various poses. There was fat Buddha and thin Buddha, sitting Buddha and standing Buddha, young Buddha and old Buddha. Unfortunately, there was no Oscar Buddha.
I continued onto the next gift shop where the Chinese version of “Oh Susanna” was blaring over the Muzak system. I asked the clerk about the Oscar statues even going so far as doing my best Oscar impersonation (i.e. standing rigid with my hands folded over my stomach.)
“You know?” I asked slowly, “Oscar? A-c-a-d-e-m-y Award?”
The clerk nodded her head as if she knew what I was looking for and she then led me over to a shelf dedicated to a collection erect gold penis statues.
The day after my adventure in NYC, I went to a local party store to pick up a few helium balloons. “By any chance,” I asked, “do you have small gold Oscar statues?”
“Not anymore.” the clerk said. “The manufacturer got sued by The Academy of Arts and Sciences, and we had to take them off the shelf. Too bad,” she said, “They were a big seller.”
I told my daughter “C” that I looked far and wide for Oscar, but unfortunately I couldn’t find him. “Oh, that’s okay,” she said, “I didn’t really want those statues anyway.”
Posted by Bobby at 10:29 AM 6 comments: