Dressed all in black

Went down to the station

And he never came back

They found his clothing

Scattered somewhere down the track

And he won't be down on

Henry, my engineer, was in particularly good spirits that afternoon. His beloved Baltimore Orioles had just swept The New York Yankees in the latest home stand series and he was crowing, saying his birdies were going to go all the way to win the American League pennant.

"Notch it out to P-2," yelled a technician from the middle of the head car.

Henry cranked the throttle clockwise and we began to accelerate.

The test train we were running had just been refurbished, meaning that the railroad had to put a 1ooo or so miles on the equipment before they would accept delivery from the re-manufacturer.

We had no passengers on board, just me,Henry and maybe five or six electrical technicians. Each of them had a laptop computer, which in turn was connected to circuit boards hidden deep behind the train's cabinet doors. They asked us to make simulated station stops so they can make sure the train's computers were working as intended.

"B-Max!" Another tech shouted and Henry turned the throttle counter clockwise and the brakes slowed the train to a stop and we all lurched forward.

"Henry...How long until you retire?" I asked.

"P-4" interrupted a technician, and we began to rapidly accelerate through Westchester County.

A gut wrenching sound came up under the train.

He had a home

The love of a girl

But men get lost sometimes

As the years unfurl

One day he crossed some line

And he was too much in this world

But I guess it doesn't matter anymore

I dreaded this day since I hired on the railroad. I'd heard other conductor's fatality stories and I knew my day would come eventually, but it's something you can never really prepare for.

As is railroad protocol, it's the conductor's responsibility to go outside and find the victim. First, I called the rail traffic controller and got a hold on all four tracks. I then climbed down the train ladder and went outside. I walked slowly back along the ballast, looking beneath the train to see if we possibly dragged the guy. The only thing I found was some blood and pieces of flesh clinging to the third rail shoes.

After inspecting the equipment, I began to walk back towards the passenger station which was about 1/8 of a mile behind us (it takes long distances for trains to stop.) It was a bright sunny day and I remember thinking that the weather was in contrast to the horror that lay before me. In the distance I could see the figure of a man slumped in the gauge of the rail. The body was folded backwards on top of itself, almost as if he were going to be neatly placed in a drawer somewhere. My stomach began to knot.

Things can get a little strange

I had just about reached the station when I saw a police car and a fire engine pull into the parking lot. They were immediately followed by a railroad trainmaster (supervisor.) After a brief interview, the trainmaster told me to go back to the train and await further instructions.

I had forgotten about Henry, and how upset he looked. When I got back to the train I discovered him having heart palpitations. I called the trainmaster and soon an ambulance was carting him off to the emergency room for observation. He was later released. Engineers are the silent victims of these fatalities/suicides and though now retired, I'm sure he still relives this incident in his sleep.

And in these days

To the ones they love

You better take a fool's advice

And take care of your own

One day they're here;

One of the perks of being a conductor is... 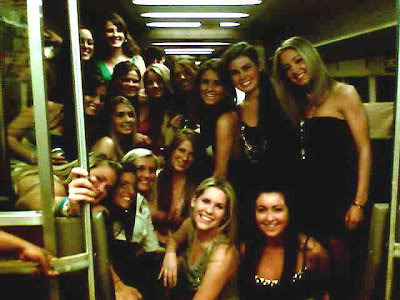 Last night I had a group of 24 Fairfield University co-eds on my train; one more beautiful than the next. They were posing for photos and I asked if I could take a picture for my blog. They were thrilled.
Now, if only my wife was:
Me: (Trying to be casual.) Hey hon...Look at this picture I took last night.
Wife: Hmmm.
Me: (A little nervous now) Yeah, they were just these crazy college girls going down to a club in the city. It was one of the girl's 21st birthday. I thought I'd put it on the blog... you know just to demonstrate how the trains are full of beautiful women.
Wife: And you expect me to buy that?
Me: Well...Yeah!
Wife: Perv!
Me: No, really... Pretty women are a big part of the conductor experience.
Wife: You realize that you're old enough to be these girls' father?
Me: ...You really know how to hurt a guy.
Posted by Bobby at 11:52 AM 6 comments:

The star to the conductors?

It must be "Topsy Turvy Day." My union secretary just sent me a link to a blog where a celebrity writes about his experience with Metro North conductors.

Jamie, a friend and coworker, always sends me the most interesting emails. Here's an
abbreviated version of the latest one:

The US standard railroad gauge (distance between the rails) is 4 feet,8.5 inches. That's an exceedingly odd number.

Why was that gauge used?

Because that's the way they built them in England, and English expatriates built the US railroads.

Because the first rail lines were built by the same people who built the pre-railroad tramways,
and that's the gauge they used.

Why did 'they' use that gauge then?

Because the people who built the tramways used the same jigs and tools that they used for
building wagons, which used that wheel spacing.

Why did the wagons have that particular odd wheel spacing?

Well, if they tried to use any other spacing, the wagon wheels would break on some of the old,
long distance roads in England, because that's the spacing of the wheel ruts.

So who built those old rutted roads?

Imperial Rome built the first long distance roads in Europe (and England ) for their legions. The
roads have been used ever since.

And the ruts in the roads?

Roman war chariots formed the initial ruts,which everyone else had to match for fear of
destroying their wagon wheels. Since the chariots were made for Imperial Rome , they were all
alike in the matter of wheel spacing. Therefore the United States standard railroad gaugeof 4
feet, 8.5 inches is derived from the original specifications for an Imperial Roman war chariot.
Bureaucracies live forever.

So the next time you are handed a Specification/Procedure/Process and wonder 'What horse's
ass came up with it?' you may be exactly right. Imperial Roman army chariots were made just
wide enough to accommodate the rear ends of two war horses. (Two horses' asses.)
Posted by Bobby at 9:59 PM 2 comments:

This afternoon an elderly, white haired passenger stopped me and asked a question.

"Conductor, what do you call the guy who drives the train? Is he a motorman?"

"Okay then, my colleague and I have a question about the engineer."

I thought I was going to hear a complaint about where the engineer had spotted the train on the platform, and I was mentally preparing an answer.

"I know it's kind of an oddball question," he said, "but we're wondering...Is it harder for the engineer to accelerate when the train is packed full of passengers?"

I tried to look learned and knowledgeable as I expounded on my theory. "You see, these trains are extremely heavy," (I had no idea what I was talking about, but I wasn't going to let that stop me) "and the added passenger weight is negligible to the train's performance."

My passengers looked pretty impressed with my explanation and they thanked me for my time and expertise.

I knew I'd shoveled the BS pretty deep, and feeling guilty, I walked up to the head car and knocked on the engineer's cab door. "Hey Mark," I said, "a passenger just asked if it's harder for you to accelerate when the train is full versus when it's empty."

"A crowded train is much more sluggish," he said.

I then swallowed my pride, walked back to my inquisitive passengers, and told them what the engineer had said.

"Yeah," they said. "That's what we thought. It's basic physics."

From Savin Rock Park to Lighthouse

Don't ask me why, but this morning, while taking a shower, I started singing "From Savin Rock Park to Lighthouse." If you're not from Connecticut, or you're under the ag

e of 85, I don't expect you to know this song. It's about the trolley ride from West Haven's Savin Rock Amusement Park (razed in the mid-1960's) and Lighthouse Point Park in New Haven. The song's origins are unknown, but I believe it was written in the early 1900's. It was taught to me by "Dick," my mother's gentleman friend, when I was but a youngster. He'd sit me on his knee (after one too many cocktails) and say "repeat after me":

(*Sung in an oompah-calliope style. Kind of like singing along to a merry-go-round.)

All for a dime

To Morris Cove too

Oh boy what a time

When we were kissin'

Oh boy what a time

If you want a good trip

Down to Dinty Moore's

We go there because

We sing the old songs

As well as the new

That's where I met

Down at Dinty Moore's

A few years back, someone wrote The New Haven Register and asked if anyone remembered the lyrics to this song. Me and a few 90-years olds were the only ones who did. Surprisingly, it seems there are a few variations to the lyrics. The trolley line (in my song, George Street) depended on what route the singer lived on. Also, not everyone remembered the protagonist's girlfriend as "Sweet Rosie O'Grady" or meeting her at Dinty Moore's (a restaurant, I presume.) This may have been a cultural lyric, possibly directed at New Haven's Irish community.

I'm not sure why Dick thought it important that I learn this song and I like to think that it was more than just the booze talking. Maybe he was psychic and knew that someday I'd have a blog and transcribe the lyrics for posterity sake.

If you remember this song or its history, I invite you to leave a comment in the section below.
Posted by Bobby at 7:00 PM 7 comments: