I was standing against the wall in Grand Central on Saturday when a woman approached me and asked, "Habla Espanol?" I told her "Muy Poquito" (very little). She then pointed to the grand staircase and said something about "La pelicula" which I knew meant "movie/film" and I guessed that she was asking me a trivia question...which I love...even in a foreign language. 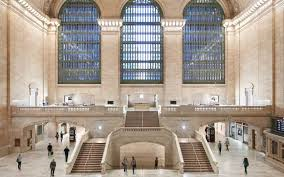 "Los Intocables"? She asked hopefully. I took a couple of years of Spanish in high school and college but I don't remember learning "Intocables"...but not wanting to disappoint, I gave her a pen and a piece of paper and said "escribe" (write). She grabbed my pen and drew a staircase and next to it wrote "policia" which I knew meant "police." It was starting to feel like a game of Pictionary on Univision, so I became overly-animated, turned to my coworkers and yelled "hey guys...Can you think of a police movie filmed on the grand staircase?" They all shrugged as if to say "No" ( which means the same in both English and Spanish.) The woman was starting to look frustrated with me and wrote in big letters "LOS INTOCABLES." I have a lot of bilingual coworkers, but none were standing with me, so I had to throw my hands up and say "sorry" (but I couldn't think of the Spanish equivalent for the word).

As the woman walked away, I felt defeated, but then I remembered I had an iPhone in my pocket. I quickly Googled "Los Intocables" and the movie "The Untouchables" popped up. I then Googled "The Untouchables Staircase" and a shootout scene popped up on You Tube of Elliot Ness (Kevin Costner) shooting someone on  Chicago's Union Station staircase. I chased after the woman, wanting to say "No esta Aqui, esta en la Ciudad de Chicago!" But she was gone...I was crestfallen, then angry. I thought; what kind of person asks movie trivia questions in a foreign language? Then I remembered...I AM EXACTLY THAT TYPE OF PERSON;

"Hey Pierre" I'd ask dismissively while pointing to the Eiffel Tower...'Rush Hour 3'?" 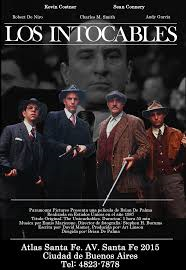 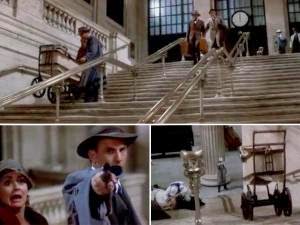 Operations Manager: Mr. McDonough, we need you and your engineer to bring 10 deadhead cars (no passengers) to New Haven. But there's a situation...A RAT has been spotted running around the south car in the engineer's cab.

Me: Like in the cab where I have to do the brake test?

Me: Like in the cab where I have to do the reverse move when we get to New Haven?

Operations Manager: Yep, that would be the cab... Oh, and don't leave your railroad bag on the floor. We don't want you bringing home any pets.

I half-expected the 4 guys in the office to suddenly burst out laughing...maybe an early start to April Fool's Day. Perhaps, I thought, one of them discovered my rodent-phobia from reading my blog post (below), and they were just having a little fun with me.But their faces remained stone-cold sober.

"New Haven Station to Metro North train 5588  Do you have a rodent onboard?.  Over!"

It wasn't easy backing up a train in New Haven with one hand on the emergency brake whilst waiting for Willard to spring into action. No rat appeared, but it was easily the longest reverse move of my railroad career.

http://bobbyderailed.blogspot.com/20…/…/of-mice-and-men.html
Posted by Bobby at 1:02 AM No comments:

So, I'm snowed in during a blizzard with nothing to do...and I started thinking about this poor neglected blog.  I'm sorry that I haven't written much, but it seems I get most of my writing frustration out on facebook now.  So, for those of you out there who aren't my facebook friend but still want to know what's happening in "The Conductor to The Stars" life,  I give you some of my recent facebook status updates:

Three college girls with bloodshot eyes got on my train tonight. They all reeked of cannabis. I explained (no less than six times) that they had to transfer trains to get to Fordham, but their stoned brains couldn't grasp the concept of transferring to another train. I was starting to get a contact high, so I finally asked..."Have you girls been smoking pot tonight?" They all denied it, but their orange Cheetos stained fingers, and several empty strewn bags of Chips Ahoy told a different story. The next time I walked by them, they had sprayed cheap perfume on themselves. Now they smelled like cheap perfume AND pot. Not a good combo.

So, this happened tonight:
Me: Tickets please...(now reading the young guy's college ID)... "Mr. Trepod."
Him: Here you go conductor (hands over ticket).
Me: "Trepod"...kind of like tripod.
Him: Yeah, that's what all the girls tell me....
Me: Well played sir, well played.  I bet you use that line all the time.
Him: Not enough. 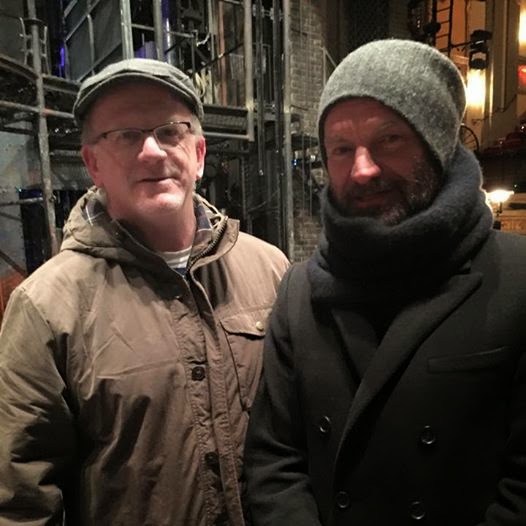 Yes, one of the joys of being a railroad conductor is having friends in high places...mostly the Broadway Theatre catwalks.  Over the years I have befriended several Broadway stagehands, and they are great at hooking me up with backstage tours when I visit a show.  On this night, my family and I saw "The Last Ship" which starred Sting (he also wrote the musical score).  I saw him on stage before the show
and asked if he'd take a photo with me.  He was a little reluctant, but he enthusiastically took a photo with my wife and daughters.  He even took his hat off for them. 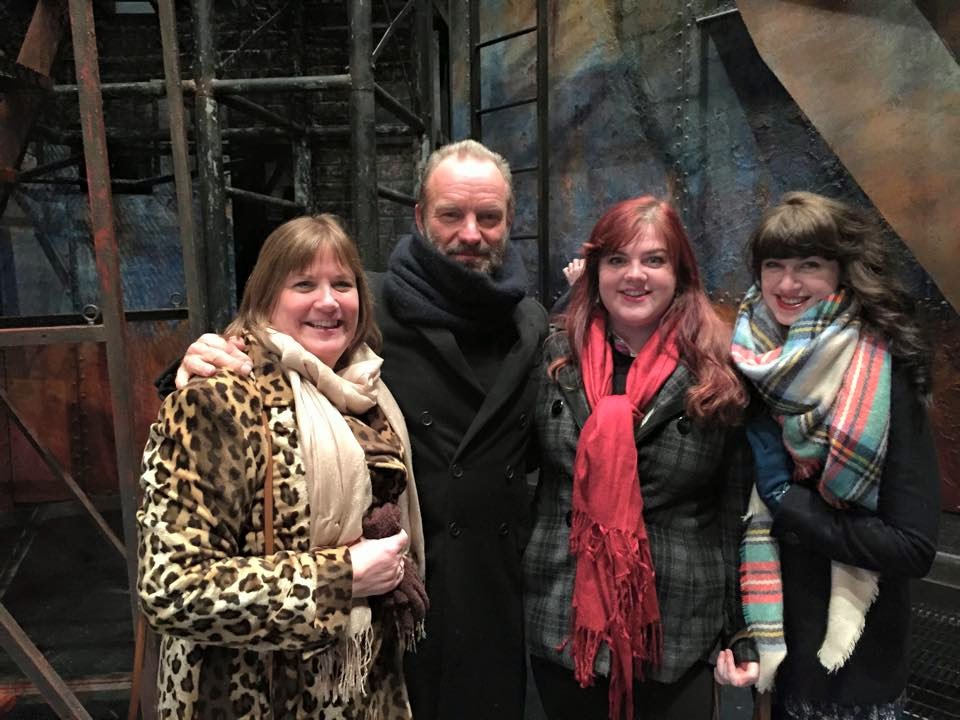 Happy Thanksgiving to all!  Let the; "Hey! You look just like the Conductor from The Polar Express" season begin.

24 November 2014
Note to self: Never go to Shoprite on a Tuesday, which is "Senior Day"...especially on the day before a snow storm...two days before Thanksgiving....again. It was like shopping in God's waiting room. 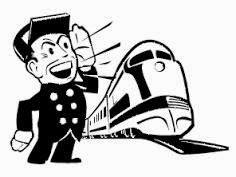 8 November 2014
Conductor Bobby's tip of the day: Hey Kids! When it's 2AM and you are so drunk that you can barely walk, stumbling home in the middle of the tracks is not your best option. Take the 18 -year old doofus we nearly ran over on my train early this morning. I had to climb off my train and give him a stern talking to. After ten minutes of negotiating, doofus finally agreed to climb aboard our train and we carried him to the safety of the waiting arms of the MTA police in Stamford. Don't be like doofus...call a friend, call a cab, walk home along the mean streets of Greenwich, Connecticut.


20 October 2014
I met comedian Jim Gaffigan tonight at a book signing for his new book, "Food" at Barnes and Noble at Union Square, NYC. He is portraying my father in the upcoming Michael Almereyda Film called "Experimenter." It's about behavioral psychologist Stanley Milgram and my father's participation acting as "The Learner/Victim" in the infamous 1961/62 experiments done at Yale University.  The film premieres at The Sundance Film Festival January 25, 2015. 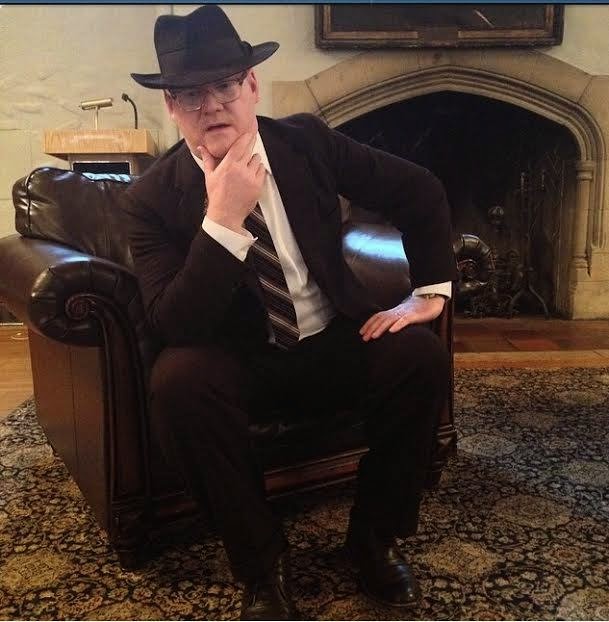 It's not often that a McDonough passes a bar. Congratulations to my niece, Attorney Emily McDonough!