Lost and Found II: Koala goes "Down Under." 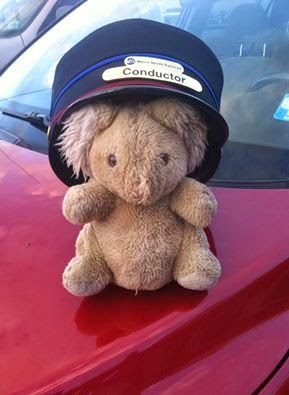 On Saturday, I came upon a sobbing, heart broken, 5 year old girl while collecting tickets. Her father explained that his daughter dropped her favorite stuffed animal, a koala bear named GG, while switching cars just as the train was pulling out of New Haven Station. Apparently the little girl sleeps with "GG" every night, and dad feared a sleepless night in NYC. I took the dad's number and promised the little girl that I'd do my best to find GG when I returned home.

That night, as we pulled into New Haven, I discovered GG laying face down in the gauge of track 12. I took this picture of the bear, and texted it to the dad. Father and daughter were both greatly relieved. Turns out "GG" originally belonged to dad when he was a child.

I made arrangements for the family to pick GG up at the New Haven Ticket Office on Sunday, and I'm glad to report that the little girl and Koala are happily reunited.
Posted by Bobby at 12:08 PM 2 comments: