News came yesterday of the death of bestselling author Dominick Dunne. He was of 83.

Mr. Dunne had been an occasional passenger on my train, and I wrote about him back in May of 2006. Here's the link: http://bobbyderailed.blogspot.com/search?q=dominick+dunne 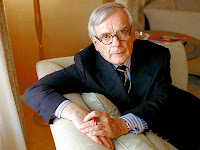 We've lost two of my favorite writers over the past couple of months; first "Angela's Ashes" author Frank McCourt, now Mr. Dunne. I was fortunate enough to have met both of these fine gentleman. I'm sure St. Peter is being charmed by these two wonderful story tellers.
Posted by Bobby at 9:37 AM No comments:

If you happened to be listening to the railroad radio channel at 8PM on 08/13/09, this is what you would have heard:

Yes sir. I just spotted two trespassers by the side of the tracks in the vicinity of Catenary 874...just west of Milford station. Over...

You got a description. Over...

Yeah, I just got a quick glimpse...but she appears to be topless. Over...

Train 1107 was just two trains ahead of mine and we were rapidly approaching caternary 874. "Did you hear that transmission?" I asked my engineer over the PA. Then..

Central to train 1591 (the train immediately ahead of mine).

Be on the look out for two trespassers in the vicinity of cat 874. One male. One blond-topless female. Over...

And let me know what you see. Over...(I've never heard an RTC express such interest in a trespasser before.)

Yeah...they're still there...caternary 874. She flashed me just as we passed.

Roger. Central district G to the train 1109 (my train). Be on the look out for trespassers in the area caternary 874. One male Caucasian. One female Caucasian, blond- topless.

"I'm glad he cleared that up." I said to my engineer. "I wouldn't want to confuse this topless woman with a brunette, or African American one."

Safety is always my first priority, so I positioned myself at the barrell end door window at the front of the train...uh, for safety sake...yeah, that's it...for safety sake. "Caternary 877-876-875" I was counting down. My heavy breathing fogged up the window and I had to wipe the condensation from the glass. "Here we are ...caternary 874 and...and...and...nothin'.

Train 1109 to Central G. There are no trespassers in the area. Just two Metro North trucks.

I turned to my engineer and asked, "since when does the track department chase trespassers off of the right of way?"

After a month of service disruption, the Waterbury train returned to service, and as if to welcome me back, the very first customer I encountered paid the $2.25 fare with 225 pennies.

I was boarding the train in Grand Central, when a woman who looked exactly like former MSNBC reporter Ashleigh Banfield ran past me. A few years back, the bespectacled Banfield was the hot rising celebrity journalist, and her reports were all over the cable news channels. But then she criticized NBC and ticked off the studio brass. They fired her, and now she works for Court TV (Tru TV).

When I collected the woman's ticket, I thought that I was mistaken. Now, up close, this woman looked too young and blond to be Asleigh..

"For a minute there, I thought you were Ashleigh Banfield." I said.

"But you're much younger."

The woman's husband was sitting next to her, he looked up, laughed and said, "You're kidding...right? This is Ashleigh."

"Wow. You're younger than you look on TV."