Of Mice and Men

About an hour ago, I went to cook up some burgers on my gas grill. When I opened the lid, two beady little eyes looked up from the under the grates. It seems a mouse has built a nest under the burners and is now raising her three tiny, hairless, babies there. Part of me wanted to jab them with a broomstick, part of me wanted to turn the propane jets on high, light a match and incinerate them. In the end I did what any other self-respecting man would do…I ran and got my wife to take care of it. (After all, it is Father’s Day, you know!)

If truth be told, I suffer from a debilitating condition known as “Musophobia” or fear of mice; a fact that my wife discovered very early on in our relationship. One night, when we were watching TV at my mother’s house, she fell asleep on the couch. Being the gentleman that I am, I covered her with a blanket, and then sat down on an adjoining love seat. Out of the corner of my eye, I spotted a mouse scurrying across the shag carpet and then leap onto the blanket that was covering my wife (then girlfriend).

“MOUSE!!!” I screamed, now standing on the love seat, much like a cliché sitcom housewife.

“WHAT? WHAT? WHAT?” My freshly awoken love screamed back, now following my lead and dancing on the couch, but not sure why.

“You’re flipping out over a mouse?” She asked.

“Well yeah,” I said, now climbing down from my perch atop the love seat, trying to salvage any bit of manhood I had left.

“You almost gave me a heart attack!” She said.

To understand the roots of my anxieties, we must revisit my childhood.

I grew up in an old, drafty house, just steps away from the railroad tracks that I now travel on every day. My mother’s house was built sometime during the Lincoln administration, long before the advent of electricity and home insulation. I believe Edison himself wired the house, but no one ever thought to insulate the walls. This, in turn, made the home a haven for mice trying to escape the wrath of cold New England winters.

After my father died, his mother (my “Nana”) came to live with us for a short period of time. She was close to 80 years old, walked with a cane and was then suffering from the early stages of dementia. I was only about four years old, but I do remember her living with us. It was also about this time that my first encounter with a mouse home invasion occurred.

We were all sitting around the TV room watching Ed Sullivan, when one of my sisters spotted a mouse. “MOUSE!” She cried. Everyone in the house jumped up on the nearest chair, table, couch etc. The rodent was undoubtedly as frightened as we were and scurried alon 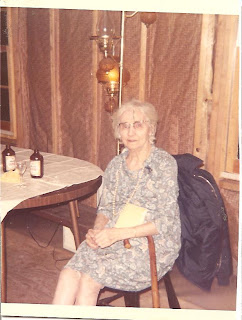 g the baseboard and finally disappeared into the kitchen. My Nana, enlivened by my sister’s screams, somehow got out of her chair, grabbed a broomstick and chased the rodent around the kitchen until she had it cornered. She then mercilessly beat it to a bloody pulp. To add insult to injury, she picked the mouse up by its tail, turned the hot tap water on and slowly scalded it to death. It was as if she were torturing it to set an example for other mice in the house. She wasn’t done yet. As a final insult, she took the mouse and flushed it down the toilet. I can still picture its furry little body, spinning counter-clock wise into the porcelain abyss. I don’t know who was more traumatized…the mouse or me. I’m guessing it was me!

My brother Jimmy said he once saw my Nana snatch a mouse that was hanging from curtain and then squish it in her bare hands until the blood spurted from it's eyes. The woman was a true mouse-nazi.

When my kids were little, my wife and I took them to Story Land Amusement Park in Glen, New Hampshire. We stayed in the local Story Land Best Western Motel. Sometime during the night I heard the sound of gnashing coming from the motel room closet. It was there that we stored the kid’s snacks, so we knew it was a mouse. My wife must have forgotten the lesson she learned early in our courtship, because she wanted me to go investigate. I called the front desk instead.

Me: Yeah, um hi! This is the family in room 212. I hear noises coming from inside the closet and I think we might have a mouse. Um… I was wondering…could you send someone over?

Manager: Sir, you’re in the country now. These things are to be expected. We’ll send somebody over in the morning.

Me: Um, ah, hold on. Is it possible that you could move us to another room?

Manager: Sir, it’s 3AM on a holiday weekend. We don’t have any more rooms available.

My wife called me a few choice names, opened the closet door, found the mouse hanging from my favorite fleece jacket, opened the motel room door, threw my jacket (with mouse attached) out into the parking lot and slammed the door shut.

Back to the gas grill incident. I really tried to be a man today…honest! I poked the cast iron grill housing with a broomstick in hopes that the mouse would fear me, as much as I feared it, and maybe it would run for safety. I even removed one of the grates, but then the mouse looked me straight in the eye and that was it…I was done. I ran inside.

My wife came out and began to disassemble the grill and found three little hairless babies inside the nest. She said she tried to put herself in the place of mama mouse and pictured a Giant lifting the roof of our house and poking us with a broomstick (sounds like spooky Twilight Zone stuff to me). She then left the mice where they were and closed the lid.

“Don’t stay too long mama,” she said. “Summers here and we have some grilling to do.”

I say let them keep the grill. I don’t think I can stomach using it again anyway.
Posted by Bobby at 12:42 AM 15 comments: