I was recently contacted by a writer for Milford Living Magazine, asking me to write my ruminations on Milford Station, and how things have changed on the railroad over the years:

When I first hired out as a conductor on Metro North some 25 years ago, I had little seniority and was forced to work out of Stamford. At the time I lived in West Haven near the Woodmont line, and everyday I'd deadhead (ride the train when not on the clock) from Milford Station to Stamford Yard. All these years later, I still consider Milford as my home station.

I moved east to Clinton 11 years ago, and I now only catch quick glimpses of Milford from my train cab window. I've seen the once quiet shoreline town's mom and pop stores disappear. Upscale boutiques and chi- chi restaurants seemed to have popped up out of nowhere. Gone are the Capitol Theatre and Jake's Cafe (a railroad worker favorite). Fladd's Music, where I once took guitar lessons, is now a yuppie cafe. Even the High Street stop sign has been electrified and blinks its demand in LED lighting ( I hear it's the only one of its kind in the country). The city is beautiful, but it seems to have lost some of its small town charm to a more affluent Fairfield County vibe.

Milford's train Station has changed too. The New York bound side used to abut track # 3, but some years back, the railroad decided that they could save maintenance costs by eliminating a track from Woodmont to Devon. Track #3, which had intersected Milford Station, was removed from service and the New York bound platform was pushed south over the missing track bed. The platform now parallels track #1. West Haven is building a station now, and I hear rumors that they may be putting track #3 back in service. Maybe they should just put a giant concrete slab on wheels and push the platform back and forth at will. 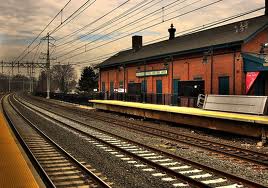 Milford Station's eastbound platform has changed too. It used to fit only four train car lengths, meaning if a Milford passenger was sitting in the front or rear of an 8 or 10 car train, they would have to walk back or forward to exit the train. Inevitably, someone wouldn't hear the conductor's announcement, and they'd be carried by their stop, and end up swearing at the conductor in New Haven. Thankfully, some years back, the platform was lengthened to 10 car lengths, and now the only "carry-bys" are those passengers too glued to their cell phone, or their MP3 headphones to hear the conductor's station announcements.
It's hard to believe now, but 20 years ago the trains still had smoking cars. And because I was the rookie conductor, I was always assigned to the smoke filled cars (cough!!!) and came home reeking of nicotine. The railroad eventually banned smoking on board, but air pollution was quickly replaced by noise pollution. Requests like, "Conductor, can you tell that man to put out his cigarette?...were quickly replaced with..."Conductor, can you please tell that guy on the cellphone to keep his voice down?"
Yes, technology has really taken over. I recently was scouring the train for a copy of The New York Times, and to my amazement, I couldn't find one. It seems everyone subscribes to newspapers on their IPad or Kindle now (at least the ink doesn't rub off on your hands). I must admit, without all those newspapers underfoot, the trains are a lot cleaner... but it will be a cold day in Hell before I buy a copy of The New York Times.

Last week I climbed onto my 40 year old train in New Haven Yard, The cars were ice cold, and the Public Address system didn't work. When we pulled into Milford the doors refused to open. On the platform, a group of Laurelton Hall girls huddled together, giggling about Fairfield Prep boys. I walked over to the frozen door and gave it a swift kick with the heel of my boot. It slid open. It's good to see that some things never change.
Posted by Bobby at 10:12 AM 7 comments: