While growing up, my older brothers teased and harassed me mercilessly, so I felt it only right that I pass these torture methods on to my nephew Danny, who is only seven years my junior. It wasn't all taunting and wrestling matches though, we also spent a lot of quality time together coloring or drawing pictures at my mother's kitchen table. Being older, my motor skills were more advanced and I took perverse pleasure in comparing my more detailed drawings against Danny's rudimentary ones (this infuriated him!).

As Danny got older, his sketches got better and better and I eventually stopped showing him my artwork all together. By the time he reached Junior High, his creations were incredible and we all knew he'd be an artist someday.

Dan and his wife Jasmine are now successful graphic artists in New York
City. He enjoys his job, but his first love has always been animation. He is now looking to create cartoons for television and for the past two years has submitted ideas to the Animation Magazine Pitch Party contest. Submissions are reviewed by a panel of judges and voted on by you the online community. The winner gets a meeting with the head of a major studio (i.e. Dreamworks, Nickelodeon etc.) to pitch his/her idea for possible future development.

This is Dan's submission this year: 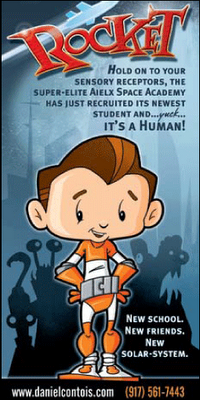 This was last year's submission..."Ghengis Conroy":

The staff of Animation Magazine voted "Ghengis Conroy" best submission of '07. Unfortunately, it didn't win the online voting poll (somebody must have had a lot of relatives out there). Hopefully this year, with your help, Dan can garner enough votes and win the contest.

I like to think that Dan's drive and creativity is the result of some deep seated sibling rivalry (yeah, I know he's technically not my sibling...but close enough). Maybe, in some small way, I'm responsible for his talent. If so...I couldn't be prouder.

"It was a dark and stormy night"

Last night we had a severe thunderstorm and we lost our power. Just as the lights went out, our younger daughter called home from a friend's house.

"Dad...Can you come and pick me up at Taylor's house?"


Just then a big bolt of lightning flashed nearby and I heard static on the phone line.

My wife had been going from room to room lighting candles when she overheard my phone conversation.


(Baa-BOOM! A loud clap of thunder shook the house.)

"I'm a man's man" I explained, " A manly man who's not afraid of danger. In fact, if you look up 'Manly Man' in the dictionary, you'll see my picture:

Manly Man-n-: A brave man that laughs in the face of danger. See photo at right.

"Yeah,"My wife said, " You're a manly man...at least till a little mouse goes running by. Then who do you come calling for?... ME!"

"Hey," I said. "Even Superman has Kryptonite."

My older daughter walked into the room at this point and heard our conversation.

"Good one dad!" She said. "That comment should go on one of your blog posts."

I grabbed my keys and ran out of the house and into the dark and stormy night. My wife nervously watched out the front window, then turned to my daughter and said:

"That manly man just pulled out of the driveway without his headlights on."
Posted by Bobby at 1:43 PM 5 comments:

In my college years, I worked part time at Sears in Orange, CT in the paint department. One day, while filling in at the candy counter, Sally and Emma, two highly educated coworkers, called me a "palindrome". I didn't know what a palindrome was but figured I'd been insulted. I sought out several of my fellow employees and asked what the word meant, but to further antagonize me, Sally and Emma had coached everyone and instructed them not to tell me.The only answer I got was "Bob, you're definitely a palindrome, but we can't say why." I was livid. When I got home I ran to the dictionary and looked it up:

pal·in·drome n.
1. A word, phrase, verse, or sentence that reads the same backward or forward. For example: A man, a plan, a canal, Panama! 2. Bob!

I was reminded of this story today, because my friend Jamie sent me this belated "Bob Day" video: 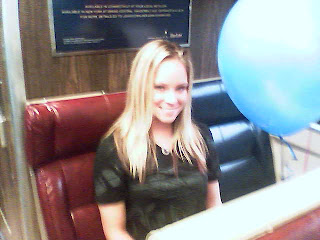 This lovely young lady got on my train last night in Stamford. She was carrying a boquet of six helium balloons. I wished her a happy birthday, but she said it wasn't her birthday. The balloons were a gift from the students in her dance class. The kids were congratulating her on being one of the finalist on the Fox reality TV show "So you think you can DANCE."

I give to you, Lizz Plott:


I asked Lizz if she won the competition but she said she couldn't tell me since the series is still running and it's against FOX policy to divulge the results. I told her about the other reality TV stars I've met over the past few years.

" I once had Evan Marriott from Joe Millionaire on a busy morning rush hour train. He's real tall and was sprawled out across five seats. I had to tell him to take his cowboy boots off the seat." (a big railroad no-no).

She didn't seem impressed by this story.

season one of The Apprentice. We had a nice little chat...she was a real sweetheart."

She still looked unimpressed, but I continued:

"I have this blog...and I write a lot of stories about celebrities I've met on the train. I was thinking about doing a piece on reality TV stars and I was wondering if I could write about you and maybe take your picture."

She seemed less than enthused with my idea, so I whipped out my camera phone and showed her the Gwen Stefani picture (Yes, again). I then mentioned how Justin Long didn't want me to take his picture and I inferred that she didn't want to be like him...did she?

Lizz asked if I knew of a place near Grand Central where she could watch the show since it was coming on at 8PM and she wasn't going to be home in time. I recommended a deli on Lexington Avenue that has a quiet backroom with a big television. It was then I knew that she must not have won the competition.

I checked the "So You Think You Can DANCE" website today... She didn't advance. I guess appearing on "Derailed" is a good consolation prize.

Folks, I must say... I'm a little hurt. As most of you know, Monday, May 26th, was "Bob Day"(a day to celebrate the ultimate OK guy), and yet, I didn't get a present, greeting card or phone call from any of you (Okay, my sister Sheila called,

but she was three days late.)

I blame my identity crisis on two sources:

My parents, having already named their previous eight children, gave the awesome responsibiltiy of tagging child number nine (me), to Emmett, my oldest brother. For some reason, he took a liking to the name Robert and overruled all his younger sibling's more creative suggestions.

At home and in my neighborhood, I was always called "Bobby," but in St. Lawrence Grammar School, nobody was allowed to use nicknames. There were no Billys, Kathys, Pattys or Bobbys; only Williams, Kathleens,Patricias and Roberts. This inhumane policy led my classmates to refer to me as "Robert"(a dreadful name) or the much more heinous "Rob." (No wonder I hated that school.) When I reached 9th grade, I went to public school. On the first day of class the teacher passed around a sign-in sheet, explaining that we were to write down the name we preferred to be called...even nicknames were fine.

"What freedom!" I thought.

I took out my #2 pencil and started to write "Bobby" but somewhere around the second "b" the graphite froze to the paper. I'm not sure what happened, but for some reason, I began to feel too mature to be called "Bobby" (such a youthful sounding name.) Sure, Bobby Kennedy pulled it off, but he was a great touch football player, and I was strictly second string. He also had the advantage of coming of age in the 1930's when children had all sorts of dopey names. When kids of my generation heard the name "Bobby," they immediately thought of the freckled, youngest boy in the Brady Clan.
Back to 9th grade; I finally lifted pencil from paper, leaving "Bob" in the designated box. Before I knew it, teachers, classmates, friends, girlfriends , were all calling me "Bob." It's amazing how the name steamrolled. Lately, I've been regretting that day. I'm not sure if it's middle age, but suddenly, I want to be "Bobby"again. I think Dr. Phil would say my regression to "Bobbyhood" is due to a Peter Pan Complex, and that I don't want to grow up. But then again, what does Dr. Phil know?

I was inspired to write this post today by a bird. I am somewhat of an amateur bird watcher, and this morning, for the first time, I spotted a "Bobwhite" by the side of the road. This got me to thinking...I wonder if nuns call these birds "Robertwhites?" and did they get any greeting cards on May 26th?