On my train home tonight, a middle-aged man startled from a drunken slumber and hazily looked around in a panic. He spotted me from the corner of his eye and yelled, "YO CONDUCTOR...WHY IS THIS TRAIN GOING BACKWARDS?" I walked over to where he was seated and patiently explained that the train wasn't going backward, he was, in fact, sitting backward. I guess my explanation was too difficult for his pickled brain to grasp, as evidenced by him poking his sleeping wife who was seated next to him and yelling "HONEY THE TRAIN IS GOING BACKWARDS!" His wife was leaning forward with her face plastered to the pleather headrest in front of her. She managed to slowly unpeel it, then rolled her blotchy red face toward me, one eye open, drool running down her chafed chin, then slurring, "Why the train going backwards mister?" I again tried to explain, now pointing, that we weren't going backward, it was just that they were facing opposite the direction of travel. The husband looked at me expressionless, sat silent for a moment, then asked, "Did you pull some kind of trick on us or something?" At this point, I threw my hands up in the air and said, "Yes, yes I did. I'm a very tricky guy." Then I walked away.
Posted by Bobby at 12:28 PM No comments:

Being a conductor on a six car train full of drunk and disorderly passengers at 2am...then discovering there's an electrical problem and the doors on your train won't open when you reach the first station. 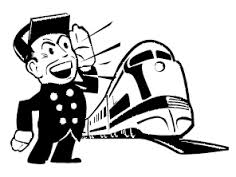 When we got to Stamford, I ran through the train trying different door panels while calling my engineer on my radio to see if he had the "door override" button pushed. Then I call the Rail Traffic Controller and tell him the problem. Large piles of Passengers are standing at the doors looking at me like I am an idiot, so I try... to make an announcement to tell them what is going on, but the volume is too high and all they hear is the high pitched squeal of feedback. My engineer calls, telling me to check all the circuit breakers, the RTC calls to tell me to check all the door panels. I finally find a single door that will open and a mob of drunken college kids stampede toward that one door. Just as they try to get off, another pile of drunks try to pile on...both lots tell me I'm an "F-ing idiot" and want to know why I don't simply open the doors. The MTA police are now on the scene and they want the train number, my name and employee number. Simultaneously, pods of people gather, wanting to know; "how long will we be here? Should I call a cab? Hey conductor, why don't you open the F-in' doors already? " I try to make another announcement, but all they hear is "SQUEACK!" Luckily, the RTC tells me there's an empty train 10 minutes away. We eventually key 3 doors open and transfer passengers to that train.
Posted by Bobby at 2:57 AM No comments: