What happened that evening in 1996 was surreal and like something out of a Martin Scorsese movie.

Flashes across the screen.

My tale begins 12 years ago on Memorial Day weekend. I was working the 11:22 train home from New York to New Haven on a Saturday night. This train has a Waterbury Branch connection, meaning that we had several branch passengers, or “Naugatuck Valley Mutants” as my coworkers call them. Most of these people are hard working, God fearing individuals, but there are also several ne’er do wells, many fresh from serving prison terms, returning from stints in a half way houses, rehab facilities or methadone clinics. Most are on the low end of society’s economic scale. Some are dirty; others missing teeth, and many have a hard time coming up with a ticket or train fare.

On this particular night, I collected a Waterbury ticket from a thin glassy-eyed Puerto Rican man in his mid twenties. He spent most of the ride taking nips from a bottle of whiskey he had wrapped in a paper bag. He looked a little inebriated, so I warned him to stay awake or he’d miss his connection in Bridgeport. He grunted something unintelligible to me and then closed his eyes. Somewhere around Milford (two stops beyond Bridgeport) I heard a loud pounding on my train cab door. It was my drunken amigo.

“Where’s the Waterbury train?” He asked.

I looked at my watch and said, “Half way to Waterbury by now. You must have slept past your stop.”

“How am I going to get to Waterbury?”

“I don’t know,” I said. “That was the last connection of the night. Maybe you can get a cab in New Haven.”

I assumed he meant “you” as in Metro North and I told him that the railroad couldn’t be held responsible for people who fall asleep and miss their station stops.

“Yo man,” he said. “You think this is funny or something? You better get that smirk off your face.”

I didn’t realize I had a smirk on my face, but his threatening manner was making me a little nervous, so maybe I flashed a defensive grin.

“You better get me to Waterbury.”

“We’re done here,” I said, and I slammed the cab door in his face. He then spent the next five minutes pounding on my cab door, calling me names and threatening to kick my ass. Thankfully, we were almost to New Haven, so I didn’t bother calling for the cops.

Suddenly, as if to break the eerie silence, a silver and red striped train streaks across the picture, Clickety-Clack, Clickety-Clack, C-l-i-c-k-e-t-y-C-l-a... The train slows to rumble and then makes an abrupt stop.

The muffled sound of a conductor’s announcement can be heard:

“This is New Haven, our final station stop. Don’t forget your personal belongings and watch your step when leaving the train.”

The camera angle shifts and we see a balding, disheveled conductor, stepping off his train and slowly walking down the platform towards his car in the employee parking lot. The Hispanic man steps out of the shadows, reaches into a blue knapsack and quickly stuffs a shiny metal object into his right hand coat pocket. The conductor turns and sees the man and recognizes him as his disgruntled passenger.

“Let’s see how funny you think I am now.”

He then brandished an outstretched pocket, as if he were hiding a gun, and dug a hard metal object into the middle of my back.

An aerial shot shows the wide expanse of the New Haven rail yard. A conductor is shown crossing the tracks, followed closely by a thin black haired man. The pair disappear into a white trailer at the edge of the tracks.

“Bill” I said as we entered the Stationmaster’s trailer. “There’s a guy here with a gun at my back.”

Bill, the Stationmaster, knows that I have a strange sense of humor, and he must have thought I was joking.

“I’m not kidding,” I said. “Can you find a train to take this guy to Waterbury?”

Bill, quickly assessed the situation and pushed past my new friend and I. He then walked out of the trailer and into his pick up truck that was parked outside. Seconds later, he returned with a fanny pack in his hand.

“You want to see a real gun?” Bill asked the passenger. “I’ll show you a real gun.”

Seeing that Bill had a gun, I suddenly got brave and found my voice again. “Listen pal” I said. “Someone might get hurt here. Why don’t you do us all a favor and get lost.”

Surprisingly, my passenger heeded my advice and removed the object he’d jabbed into my back and walked out of the trailer. Bill and I watched as he crossed the tracks and into Union Station.

A Hispanic man is on a pay phone in Union Station in New Haven. An MTA police officer cautiously approaches him and takes the phone from his hand. The cop then throws the man against a wall and begins frisking him.

“Where’s the gun?” Demands the cop.

The passenger says there is no gun, only a small metal camera tripod that he carries in the front pocket of his coat. The cop asks why the man carries a camera tripod in his pocket.

“I had a complaint against the conductor,” he says. I just wanted to take his picture.”

I promised Bill (not his real name) that I wouldn’t tell this story until he died or retired.

Now, if only I knew where I put my glasses

I’ve been hesitant about writing about my encounter with actor Justin Long, because 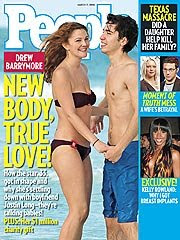 I figured most of you have never heard of him. But yesterday, when I was at the checkout line at the local grocery store, I saw his picture plastered on the glossy cover of this week’s People Magazine. There he is shown in blue swimming trunks, while cavorting in the Caribbean surf with his bikini-clad girlfriend, actress Drew Barrymore. The story is really about Drew, but still, I figure if he’s big time enough for People Magazine, he’s big time enough for a post on “Derailed.”

A few months back, I was collecting tickets on one of my afternoon trains, when a thin, boyish-looking guy, sporting razor stubble and Wayfarer sunglasses came walking down the aisle. He had just left the bar car and was carrying an army green duffel bag over his shoulder and a bag of newly purchased pretzels in his hand. I remember thinking that he looked a little nervous and suspicious. It was as if he were trying hard not to be recognized. This made me think that he was either:

A.) A terrorist.
B.) In the witness protection program.
C.) Some sort of celebrity.

It wasn’t till I spoke with Seth, our bartender, that I found out “C” was the right answer.

“Did you see that guy with the pretzels?” asked Seth.

“That’s the guy from the movie ‘Accepted.”

I had never seen the movie ‘Accepted,’ but Seth seemed pretty excited that he had just sold this guy pretzels. I must have gotten caught up in Seth’s excitement, because when I collected his ticket, (he was seated in the last seat, hidden in a corner) I asked:

“The bartender tells me that you were in the movie ‘Accepted.”

“That was me,” he whispered, as almost to say; can you please keep it down?

I ignored this, and continued with my inquisition.

“No, No,” he whispered, “Long…you know, like the opposite of short.”

He now began slouching down in his seat.

“What brings you to Connecticut?”

“I’m from Fairfield and I came home to visit my parents.”

“Hey,” I said. “Do you know that actor…Jesse something…you know, the kid from ‘Flags of Our Fathers?”

“Yeah, yeah…that’s him. “You know, he’s also from Fairfield, and he’s ridden my train a couple of times. He seems like a nice guy.”

“Yeah,” he said. “I know him. Our parents are good friends.”

“Well it was nice to meet you Justin.”

He seemed to be relieved when I walked away.

I continued collecting tickets till I came upon a group of guys in their twenties. I asked if

they had ever heard of an actor named Justin Long and I pointed in his direction. They turned around and stared. One guy said that Long played the cool “Mac” guy against the nerdy Bill Gates’ look-alike PC guy in the current Apple Computer commercials.

Now that I had seen some of his work, I began to respect Mr. Long as a true artist. The next time I passed by him, I stopped and explained that I write a blog called “Derailed” and it contains a lot of stories about my celebrity encounters. I then began to reach for my cell phone and asked if he’d be willing to take a picture with me for one of my posts…

I was tempted to thumb through the “pix” section of my phone and show him my photos with Gwen Stefani and “Mikey” from the Life Cereal commercials.

I lost my nerve, and in the end I thanked him for his time and wished him luck.

Since our encounter, I have seen Justin Long all over the place (especially since he started dating Drew). He was in the most recent “Die Hard” movie with Bruce Willis and he is now, apparently, Hollywood’s hottest new actor.

I hope when he gets his first Oscar, he thanks the “Conductor to the Stars” for giving him his first big break.
Posted by Bobby at 11:13 AM 10 comments:

Sorry I haven't written lately folks, but I 've been working crazy hours, which has left me feeling too tired and uninspired to write anything. A few of this morning's news headlines have rousted me out of bed and to the computer.

The reason this news item is significant to me, is that two weeks ago, my family and I took a mini vacation in the city. We had tickets to see "Wicked" and "Mary Poppins," ate at "Carmines" (one of our favorite restaurants) and spent a couple of nights at the Marriot Marquis Hotel in Time Square (that would be one of the hotels that shook.) Our room overlooked the military recruiting center where this blast occured. Here's a picture my daughter took from our hotel room window: 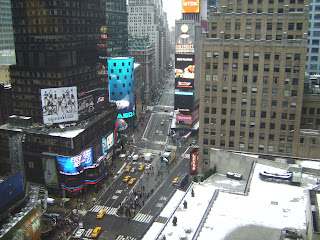 BY ASSOCIATED PRESS NEW YORK---- A vacant five-story apartment building scheduled for rehabilitation partially collapsed Tuesday, leading to the suspension of dozens of rush-hour suburban trains amid fears the vibrations could cause more bricks to fall. There were no immediate reports of injuries.

Two days ago, a building that is adjacent to Metro North tracks collapsed in Harlem. This shut down the railroad for a couple of hours and caused major delays. Luckily, my inbound train only suffered a 10 minute delay. Amazingly, a news crew had a camera rolling and caught the building collapse as it happened, (there's a short commercial but it's worth the wait.)