Home for the Holiday 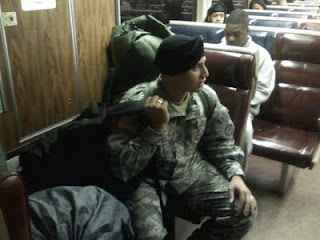 I spend a lot of time bashing the ne'er do wells who ride my trains, so today I want to praise Pvt. Luis Feliciano, Army-82nd Airborne. He was on my Waterbury train on Friday night, September 11th (of all days), returning from a stint in the God-forsaken mountains of Afghanistan. He told me that he was heading for his home in Winsted, CT for 30 days of R&R before reporting to Fort Bragg, NC.
"I'm surprising my wife" he said," she has no idea I'm coming home, and hopefully, I can talk her into coming to Ft. Bragg with me."
-
I thanked him for his service and asked how things were in Afghanistan. He said conditions were rough, considering we had to climb snow covered mountains, twenty five thousand feet up where the air is thin..it makes it hard to breathe. "We were trained for these conditions at Fort Drum," he said, "but nothing prepares you for those mountains."
-
When I asked if he'd seen any action, he nonchalantly said that he'd been in a few fire fights...only one scary one...but he acted like it was no big deal. He then changed the subject and asked how much a cab ride would be from Waterbury to Winsted. I was about to say that I had no idea, when another passenger, a fellow Army vet, chimed in saying that Winsted was about 30 miles north of Waterbury...and that a cab ride would cost a bundle..."but don't worry," he said, "cause I'm driving you home tonight."
-
I helped Pvt. Feliciano take his bags off the train, while the army vet got the car and a soft rain began to fall. A street lamp shone upon two silhouettes walking to a late model Ford and loading duffel bags into the trunk. I thought about Luis' unsuspecting wife waiting at home and the surprise that awaited her. I thought about all the members of the service who never made it home. I thought about the families of those lost in the terrorist attacks on that clear, crisp morn eight years ago. It was September 11th...and I got a sudden lump in my throat.
Posted by Bobby at 1:59 PM 8 comments:

An agitated man meets my train in Waterbury and asks what the fare is to Bridgeport. I tell him that it’s only $2.25 and he looks relieved. He tells me that his wife is six months pregnant with their first child and she was just rushed to Bridgeport Hospital with labor pains. He then offers a little too much information, reporting that her doctor just implanted a stent into her uterus to prevent the baby’s head from pushing down on her cervix.

“It’s called a pessary,” I say. “My wife had one when she was pregnant with our youngest daughter.”

“And everything turned out all right?” He asks.

“Thanks conductor…. you give me hope.”

Like a pollinating honeybee, a young man is flitting from one female passenger to another. I watch as he briefly hovers over each young flower, each time briefly showing them whatever he’s typed out on his cell phone’s display screen. Once rejected, he buzzes off and lands on the next available petal. Just as I’m about to reach for the Raid, he spots me and flies my way. He points to his ear, grunts, and shows me his disability card. He’s a deaf /mute. He then shows me his cell phone’s display screen:

Boy this guy must be desperate, I think, but then I notice something written in small print at the top of the screen.

How much for disabled fare from WTBY to STAM?

I find a slip of paper, and scribble… $2.50. He says “Thank you” in sign language, then zips off to sip the sweet nectar of a new and unsuspecting blossom.

When I was in 5th grade, Sister Adele introduced our class to the reference room of our library at St. Lawrence Grammar School. Before long, we boys discovered a pile of National Geographic Magazines hidden in the deep recesses of a corner bookshelf. Huddled in pods, we’d pour over the well-worn pages of the African tribe pictorials like Anthropologist studying for our doctoral thesis. Margaret Meade had nothing on us. Here we’d see multi-tasking, bare breasted women nursing their young, while carrying clay pots of water atop their heads. Tribesmen were bejeweled and covered in war paint, sitting by campfires, sharpening spares before the big rhino hunt, some flashing toothless grins at the strange and foreign camera. This is how I envisioned the denizens of the African Continent. But Mayan says I have it all wrong.

Mayan is a 40 something nurses aide who rides my Waterbury train. She originally worked as a journalist back in Africa, but says it was a dangerous job where criticizing the government could cost you life and limb. She said she now regularly works 100-hour weeks to help support her two sons and fifteen brothers and sisters back in Nigeria.

One day Mayan told me that Nigeria is a polygamist society and that her father had four wives.

“Yeah”, I mean, what are the chances that they’d all have headaches on the same night?”

She laughed a deep hearty laugh, glanced at my name badge, and in a thick African accent said:

“Really? I said. “I thought you only drank milk from cocoanuts.”

She laughed again, saying that we Americans are so self-absorbed that we know nothing of other people’s culture.

“Wait a minute…you mean to say that Africans listen to American County Music?”

“See what I’m saying about Americans….Yes, we Africans love the American Country Music. In fact, Dolly Parton… She is very big over there.

This took a minute to register, and then she let out a big hearty laugh.

“Okay, I said. “When you Africans are drinking Guinness and listening to Dolly Parton, are you usually naked and sitting around a campfire?

“What! She laughed again. “Where do you Americans get these crazy ideas?

I was going to tell her about Sister Adele, 5th grade and the National Geographic pictorials, but she had shattered enough myths for one day and I moved onto the next passenger.

-The next passenger was a woman, Bible in hand, holding a revival meeting in the head car. She shouted that we were all fornicators who needed to be saved from are sinful ways. She implored Jesus’ name several times, saying that the wages of sin were heavy and we would all suffer eternal damnation and perish in the fires of Hell. She testified that her husband was in captivity (i.e. jail) because of his lust and fornication. I was about to step in at this point, but the woman was on a roll. Besides, I remembered her from a month earlier when she sang gospel songs all the way from Bridgeport to Waterbury. I recall that I interrupted her during a rousing version of “Amazing Grace” and asked her “pipe down.” She did momentarily, but then raised her palms, stared up into the fluorescent lights and broke out into “Nearer to Thee” as a tear rolled down her cheek.

Sometimes it’s easier to walk away.

I didn’t at first.

“Yeah man I’m the guy with the pregnant wife from last week.”

“Yeah so am I.” His eyes now filled with tears.

He wiped a tear from his cheek with the back of his hand, then said, “Yeah, I’m good at the trying part.”