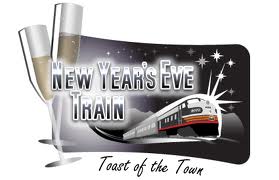 In their infinite wisdom, Metro North’s planning department somehow forgot to assign me assistant conductors on a standing room only, eight car train on NEW YEARS EVE!!! (Normally I would have at least two assistants). To add insult to injury, the ticket vending machines on the platforms had a system- wide computer glitch and they weren’t accepting credit/debit cards…meaning tickets had to be purchased from ME!!! But being the excellent employee that I am, I collected tickets in all eight cars, only missing a handful of fares (Do I hear President’s Club nomination anyone?).

When I was boarding the train in New Haven (Did I mention I was by myself?) a nutty looking guy in a grey hoodie sweatshirt pushed by me. He stood out in my mind because he had the hood pulled over his head with the drawstring pulled tight (kind of like Kenny from South Park). This left just a small oval for his eyes, bulbous nose, and grey moustache to poke out into the cool December air. He also had something large and square tucked under his sweatshirt, looking not unlike a homeplate umpire on a cold game during the World Series. I remember thinking, “I gotta keep an eye on this guy…
When I started collecting tickets, I had to keep stepping over the legs of a group of drunken college students, who I later learned were from India. I know I’m stereotyping here, but when I think of Indian college students, I think… conservative, intelligent, studious, hard working, SOBER young adults. This group however was wild. The guys were chasing gulps of Red Bull (the energy drink) with shots of whiskey, and the more the women drank, the more amorous they became. The closer we got to Grand Central, the more cock-eyed they were.

Shortly after Stamford a young women approached me and pointed out the grey hooded sweatshirt man who was now panhandling from the other passenger. “Conductor….I may be paranoid, but that guy is hiding something under his jacket and he’s making me nervous. Sorry to bother you, but as they say…if you see something, say something.”

I told her that she was absolutely right to be concerned, and I was surprised that I hadn’t thought him suspicious myself. I mean, wouldn’t New Year’s Eve be a perfect time for a suicide bomber to strike a crowded train where the conductor is working the train BY HIMSELF???

“Sir,” I said, “would you mind showing me what you have tucked under your jacket? Some of the other passengers are concerned.”

“I don’t have to show you nothin’’” he answered.

“You’re absolutely right, but if you don’t show me what’s hidden under your coat, I’ll have to call the police. Then the train will be delayed and it will be a big hassle.”

After several seconds, he begrudgingly unzipped his hoodie, and pulled up three more layers of filthy, dirty sweatshirt until he finally exposed what looked like a floral chair cushion. My untrained diagnosis is that he is a paranoid schizophrenic and is using the cushion as a poor man’s bullet proof vest.

“Thank you sir. Sorry to bother you. May I have your ticket now?”

“Ain’t got that either.”

“And where are you going tonight?”

“Do you have identification of any kind? I can bill you.”

“The only ID I got are these here tattoos.” He pulls up his sleeves and displays his forearms.

I wasn’t about to read his tattoos, so I said, “Okay, take a seat, and please don’t bother the other passengers.”

At Grand Central, the Indian students staggered off the train. Two of the men had to be supported by their girlfriends just to walk down the platform. The girls were attending to their boyfriends by keeping them hydrated with bottled water. They looked like mother birds feeding their young, pouring H2O into their boyfriend's wide-open, drooling gullets.

“They’re not looking too good.” I said. “Should I call for medical attention?”

“No, thank you,” the girls said. “We’re already late for our party.”

I spend the next several hours drinking coffee in the conductor crew room in Grand Central. Ryan Seacrest is counting down the minutes on TV, while ABC shows an aerial view of the mass of humanity that stands only blocks away from where I’m sitting. Midnight hits and I text my love ones “ Happy New Year.”

It has been a hellish year in which my wife was diagnosed with breast cancer, and has had to endure several surgeries and chemo and radiation treatments that I wouldn’t wish on my worst enemy. I then think of the surgeries that still lie ahead.  Jill has been amazing through this whole nightmarish process and I know she'll continue to do great. She's the strongest person I know.
I turn from the TV and say good riddance to 2010 and look forward to a brighter 2011. Then I gear up to work the 2:03AM train back to New Haven… but that’s a whole other story.
Posted by Bobby at 2:33 PM 8 comments: