What's blue, white and read all over? 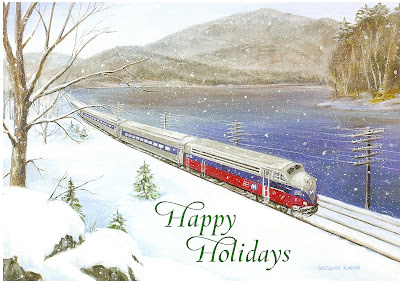 For want of a nail

The above poem is an old English nursery rhyme that warned children of the consequences of one thoughtless act. In this poem, a blacksmith doesn’t make enough horseshoe nails, which in turn results in a domino effect of unfortunate events, until finally the kingdom is lost. Todd Rundgren wrote a great song around this poem, in which the chorus concludes... “The Devil’s in the details.”

Last Wednesday, I had one of those “Devil’s in the details” kind of days. I woke up bright and early (around 5 am) and hopped into the shower. While showering I recalled how th

e fan on my car’s heater stopped working the night before. I knew that this could spell trouble, especially since it was the coldest morning we've had this season. After showering I ran downstairs and looked out the window. It seemed that Old Jack Frost had paid my car a visit overnight. My Acura looked sugar coated, and it glimmered with the reflection of the Christmas lights that hung from the gutters above it.

I threw my coat on and ran outside, hoping to find the ice scraper that I always keep in the trunk of my car. It was about 20 degrees out that morning, and in an attempt to stay warm, I danced around and fumbled through the piles of junk in my trunk (yeah, yeah...I got junk in my trunk.) I couldn’t find the scraper anywhere. Next, I searched the garage, but still …no luck. I ran into the house and asked my wife (the finder of all things) if she knew where I might find an ice scraper.

“You know,” she said, “It’s not going to jump out and grab you. You really have to take your time and look carefully.”

I told her that I didn’t have the time to look carefully, and that I was running very late. She then suggested that I use a blow dryer and melt the ice off the windshield. This sounded like a great idea.

I ran into the bathroom and grabbed a blow dryer and ran outside again. I unplugged the Christmas lights from the extension cord and plugged in the blow dryer. I then spent the next several minutes melting the beautiful geometric ice patterns that had formed on my windshield. I began to worry about how my actions might look to the neighbors. Here I was, standing in my driveway in the predawn hours, dancing around in a conductor's uniform, plugging and unplugging Christmas lights, while blow drying my car.

(Now looking out the window)

“Who knew he owned a blowdryer?”

Once the car was defrosted, I jumped in and drove down my winding country road, and the ice crystals began to form again. Somehow I found the highway, and sped down I-95 for the 20-mile ride to New Haven. When I arrived at the train yard, I was about 10 minutes late. As luck would have it, the first person I ran into was the trainmaster (supervisor).

I walked out to the train yard and climbed up the ladder into a Genesis Engine and gave my engineer a brake test. I then threw a two track switches and lined our train out of the yard. Once in the station, I boarded the passengers, closed the doors and gave the engineer the signal to proceed. I looked down at my watch…we were two minutes late.

I began collecting tickets, feeling a little exasperated by that mornings events, when a old Jamaican woman stopped me.

"Conductor!" She said, "I have to tell you something."

I figured she was going to chew me out for the train leaving late.

I bent down so she could whisper in my ear.

"Your fly is down" she whispered.

I looked down and turned bright red. In all my haste that morning, I forgot to zipper the fly on my pants. Fortunately, unlike some pop stars, I was wearing underwear.

We experienced further delays on our run into the city that day. There were overhead wire problems, a disabled train in front of us, and slippery rail conditions due to the frost. When we finally arrived in Grand Central, we were six minutes late. Although the train was only a few minutes late, I wondered how the commuter’s lives might be affected by my want of an ice scraper. I let my imagination run wild and came up with a nursery rhyme of my own:

The devils in the details.

Bobby and The Paper Lion

"Some men see things as they are and say Why? I dream of things that never were and say "Why not?"

There is a renewed interest in the assassination of U.S. Senator Robert F. Kennedy since the movie “Bobby” came out. This movie is a semi-fictional account of the events surrounding the murder of RFK at the Ambassador Hotel in Los Angeles on June 6th, 1968. I say this movie is semi-fictional because it centers on the lives of 22 people who were supposedly at The Ambassador Hotel that night, but in reality these people never existed. It’s all Hollywood.

About five years ago, I had the author/journalist George Plimpton on my train. I recognized him from his frequent guest appearances on the afternoon talk show circuit in the 70’s and early 80’s. He was what they now call a “participatory journalist” and he always seemed to be pushing a book about his latest exploits on Merv Griffin or Mike Douglas. By the time I met him, he had been out of the public eye for several years, and I was a little surprised by how elderly and frail he looked.

Because I’m somewhat of a Kennedyphile, I remembered that Plimpton was a close friend of RFK, and that he was with him on the night he was assassinated. I was dying to ask him about that evening, but I was a bit intimidated by him. When he appeared with Merv, Mike or Johnny, he always seemed a bit regal. He spoke in the aristocratic accent of a Harvard or Cambridge man (which he was), and I didn’t want to be an insensitive boor and start yapping about his best friends murder. Maybe, I thought, I’d first engage him in small talk and then I’d work my way up to the RFK questions.

“Are you related to Martha Plimpton?” I asked.

“Eh?” He answered, now cupping his hand to his ear.

“ARE YOU RELATED TO THE ACTRESS MARTHA PLIMPTON?"

“Oh, yes, yes. Sorry, I’m a bit hard of hearing. Yes, she’s a distant cousin. I’ve never met her, but I did meet her mother once.”

I now realized that Plimpton was stone deaf, and a long conversation with him would be exhausting for both of us... so I went straight for the kill.

“I’ve read that you were present when Robert Kennedy was assassinated?”

“YOU WERE WITH SENATOR KENNEDY ON THE NIGHT HE WAS ASSASSINATED?”

“Oh, Oh, yes, yes. In fact that Sirhan fellow pushed right past me to get to Bobby.”

I didn’t know what to say next. There was a bit of awkward silence between us, and I finally
decided to move on to the next passenger.

Plimpton died a year or two after our brief conversation, and I’m glad I got the chance to talk to him. It was kind of like being only two degrees of separation away from one of the biggest events of the 20th century.