Early this morning on the carpool ride home:

Engineer: Hey Bobby, that song on the radio... Isn't that Bachman-Turner Overdrive?

Me: Yes it is. Here's a trivia question for you... BTO is a spin-off of what other group?

Engineer: I told you, I don't know.

Me: What are we, Abbott and Costello?
Posted by Bobby at 11:29 AM No comments: 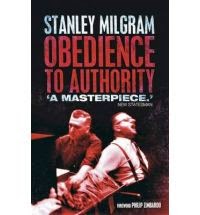 I'm convinced that there is something or someone other-worldly guiding my connection to the Dr. Stanley Milgram's 1961/1962  "Obedience to Authority Experiments."  Perhaps my father's spirit is leading me...whatever or whoever it is, it's starting to weird me out. Here are some examples:

Back in 2006,  I wrote a post on this blog called "Shocking" about my father's involvement, acting as the Learner/Victim in Dr. Stanley Milgram's  infamous behavioral psychology experiments done at Yale University. In the post I explained that my father had died of a heart attack in January 1965,  just before my third birthday and two and a half years after these experiments were completed. I further explained that the only record I have of how my father moved or sounded is through watching a documentary of the experiments titled "Obedience to Authority."

Coincidentally, on the opposite side of the globe, around the same time I had written my blog post,  an Australian Psychologist named Gina Perry was doing a radio documentary about Milgram's experiments, and she wanted to talk to anyone connected to them in any way.  She found my above mentioned blog post while searching on Google and she emailed me and asked for an interview.

Some months later, Perry flew to the U.S. and interviewed me at an inn in the heart of Yale. During the interview,  she recorded me retelling the story of my family rediscovering my father's involvement through a 1974 segment on 60 Minutes titled "Following Orders".  During the course of the interview, I gave her some leads of people to talk to, namely the names of Harold Clifford's children (he was one of the subjects in the Milgram experiment) who Coincidentally had lived across the street from me growing up.  I also gave her the name of Bobby Tracy, my coworker, whose father coincidentally happened to fill in for my father in a few of the experiments.

Perry then asked if I knew the where-abouts of John Williams, the other main actor in the experiments (the instructor in the white lab coat).  She mainly wanted to know if he was still alive.  I told her I didn't know.

Perry spent the next year scouring the entire U.S. looking for John Williams (kind of like finding a needle in a haystack), and she finally found Williams' son living in Florida. Williams' son told Perry that she was unfortunately too late, his father had died the previous year.  He also told her that he didn't know much about the experiments but that his uncle, Mark Williams (his father's brother) would know more.

Coincidentally, this same Mark Williams was my daughter's high school Social Studies teacher.  I immediately called Mark and said, "You're John Williams brother?"  I would later invite him out to lunch to meet Perry along with Bobby Tracy and Judi Lampner, the daughter of the late Aaron Aronow, a former New Haven Alderman, who was  one of the subjects of a variation of the experiments and vocal critic of  Milgram's professional ethics.  Judi COINCIDENTALLY teaches school alongside a friend of mine.

By this time, Perry had turned her award winning radio documentary into a book titled "Behind the Shock Machine." and was visiting the U.S. on a press junket.  I connected her to Sandi Kahn Shelton, a journalist friend of mine who writes for The New Haven Register. Shelton wrote a wonderful front page article about Perry's book, the experiment and of me discovering my father through it.  Along with the article was a spooky photo taken of me 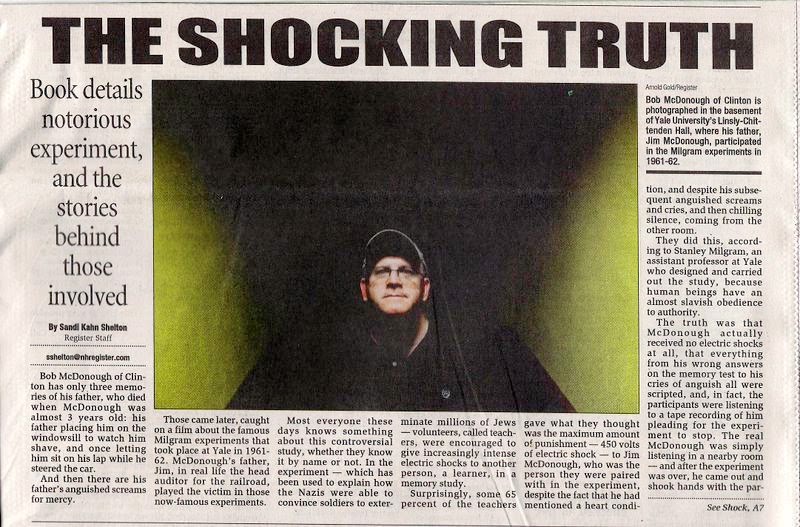 by Arnold Gold, the newspaper photographer.  In the photo, I'm standing in the basement of Yale's  Linsley -Chittenden Hall in the area where the experiments were originally conducted.  I'm looking up into the light with eerie green shadows behind me.

On the day the newspaper article was published, I ran into retired Metro North photographer Frank English on my train.  Frank lives in Manhattan and had been visiting friends in Connecticut.  I hadn't seen him in a long time, so we chatted and caught up on each other's lives.  I wanted  Frank's opinion on the picture that ran in that day's newspaper, so I showed him the front page and Gold's eerie color photo of me.  Frank was impressed with the shot and asked me what the article was about.  I told him he'd probably never heard of Milgram or the experiments but... Frank smiled and let me continue...then he said that he knew the experiments and Dr. Milgram very well.  COINCIDENTALLY his brother Ed English produced and directed the original "Obedience to Authority" documentary back in 1962.  He immediately called his brother and told him my story.

Fast forward to three weeks ago, and Gina Perry emailed me and said they're making a movie about the Milgram experiments titled "Experimenter."  I told Perry I'd love to get a part as an extra in the film since I have become somewhat of a "Zelig" to this experiment.

I looked up the IMDB page on the movie and found it's written and directed by Michael Almereyda.  I Googled "Almereyda" and discovered he's also a professor at the Tisch Film School at New York University.  I sent him an email and asked him for a cameo part in the film.  I waited a week and didn't get a reply.  I decided to call NYU and COINCIDENTALLY Almereyda picked up the phone.  He told me that he got my email, but it was too late, he had already wrapped up filming and was now editing the film.

About a week later Almereyda, emailed me again, saying that by some odd COINCIDENCE,  he had to re-shoot a scene, and asked if I'd like to come to New York and film a cameo.

Of course I would.

On Sunday, I went to New York for my film debut. I was seated in a small room waiting along costar Sasha Milgram, Dr. Milgram's widow. She kept staring at me and telling me that I look just like my father.   Almeryeda then entered the room, introduced himself, and we spent the next 20 minutes making small talk.  I told him about all the weird coincidences, Gina Perry's documentary/book, The Cliffords, Mark Williams being my daughters teacher, retired railroad photographer Frank  English and Ed, his movie directing brother, Etc.

Amereyda told me that he'd love to talk to Ed English and ask him some questions about the original documentary.  I told him that I'd try to get him in touch with Frank, but that I hadn't seen him in a couple of years.

Coincidentally, guess who was on my train last night??? Yep, Frank English.  Too weird! 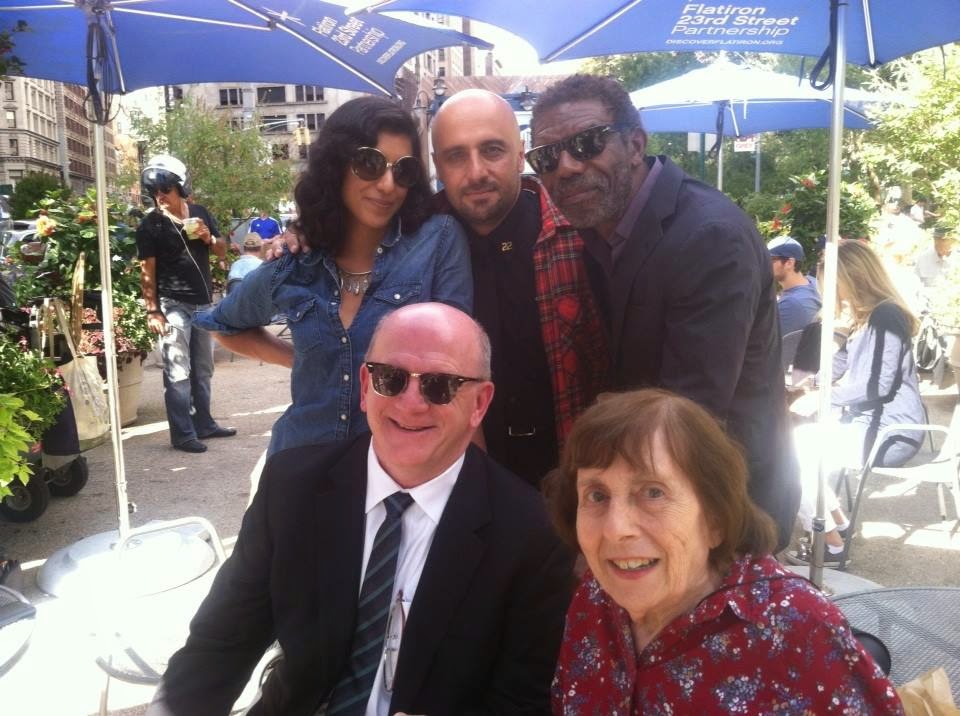