The Warmth of the Sun

Today was one of those days you just want to hold on to. I was on my way home from work when my wife called me and said that she and the girls were at the beach. She told me it was an absolutely beautiful beach day and that I must come down and join them for dinner. I had started work at 5:00 a.m. and I was a little tired, but then I remembered that the girls were headed back to school next week and that summer was fleeting.

I stopped home, changed into my bathing suit, threw my beach chair in the car and headed to Subway to pick up some subs. When I got to the beach we had our impromptu picnic dinner on our blanket and then my wife and I settled in with our books, while the girls finished their summer reading assignments (better late than never--procrastination runs in the family!). We each took turns wading in the surf as schools of tiny fish swam around our legs. It was so nice out, my wife suggested that we stay and watch the sunset. The girls were dancing on the sand as the sun sank behind them. I wished I had a camera, then I remembered I did...on my cell phone. I snapped this shot.

Once the sun had set, we packed up our belongings and then slowly walked to the parking lot...each wishing to hold on to the moment just a little longer. I started thinking about how quickly the summer was slipping away and Brian Wilson's heartbreaking falsetto began playing in the back of my head:

I was standing outside my train tonight, answering questions for the passing commuters as they boarded the 6:18 train to Harrison, when a 40-something biker dude and his old lady slalomed down the platform toward me. They each were carrying a plastic bag in one hand and a Budweiser tall boy beer can in the other. The dude was sporting a mullet hairdo with matching handlebar mustache and wearing the mandatory leather biker vest over an

orange tee shirt that stretched over his bloated beer belly. His woman was much shorter than him and had curly red hair and freckled, sunburned skin. She wore a black, skin tight shirt with a plunging neck line that nicely displayed her ample bosom. She also had a beer belly, and several rolls of fat spilled over a pair of too short cut-off jeans which clung to her wide rear end. The biker dude pulled out his Harley Davidson wallet, which was tethered to his belt loop by a metal chain and retrieved his train tickets. He handed them over to his motorcycle mama.

“Does this train go to Harrison, New York?” she asked.

“Yes it does… It’s our last stop.” I answered in a polite tone.

“You don’t got no express train or nothin’?” She seemed impatient.

“Not at this hour,” I said, “but Harrison is only six stops away.”

“Well, I don’t know!” She acted as if I had somehow insulted her. “ I ain’t from around here.”

When I came around to collect their tickets, she handed me two “Off Peak” fares. “I’m sorry,” I said. “But you have off-peak tickets here, and you’re on a peak train. That means it’s rush hour, so you owe me $2.25 more per ticket. The woman was incensed. “They consider this rush hour?” (It was 6:18 pm) “Well they should have told us that when we bought these here tickets.”

I explained that if the ticket agent had sold them a peak ticket, they would have been charged $2.25 more then, instead of me charging it now. “It all evens out in the end,” I said.
“Well that’s just ridiculous,” she protested. She was really starting to make a scene now. The biker dude again pulled on his metal chain and pulled out his oversized wallet and handed me $2.25.

“What? She screamed. “First it’s $2.25, now it’s $4.50. What are you trying to pull here! Her voice grew louder and louder and people started to look up from their newspapers. “Well mister,” she said. “I demand receipts and I want those little stubby things back.”

“You mean your tickets?”

She obviously thought I was trying to scam her and biker boy and she was practically calling me a thief. I felt a little insulted by this, and I could feel my Irish temper starting to rise. I wanted to say something snappy like: “Honey, I’m not going to risk my job over $4.50, or “If $4.50 means that much to you…you can keep it.” Instead, I bit my tongue, collected their fares, handed them their receipts and walked away.

It is part of my job to stick my head out the train’s cab window and inspect the platform before opening and closing the doors, and when we reached Harrison Station, our last stop, I did just that. I remembered that this was where my biker friends were getting off, so I kept an eye out for them just in case they tried to:

When the “uneasy riders” got off the train, Motorcycle Mama walked up to my window. “Here we go,” I thought. “Can I get a picture with you?” She asked as sweet as could be. She then handed her camera over to Biker Boy. “We’re visiting from San Diego,” she explained, “and we ain’t never been to New York before. Hell, we ain’t never been on no train before either.”

Most conductors would have told her to get lost, and slammed the cab window in her face. Others would have called her a few choice names and given her the finger. I, on the other hand, said... “Sure.” (I told you I was a nice guy.) She stood next to me and we smiled together like two old chums while Biker Dude fumbled with the camera and took several snapshots.

Later I thought…I wonder if they’re going to send these pictures to the railroad with a complaint letter. It will say something like… “Here’s the #%$* conductor that overcharged us.”
Posted by Bobby at 1:24 AM 5 comments: 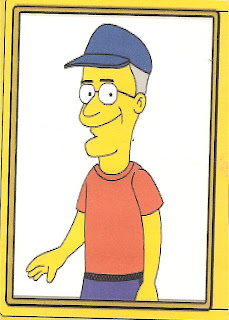 One of the benefits of having children, is that you stay on the cutting edge of popular culture. For example; coworkers regularly hear me using the current street lingo or rapping the latest top 40 songs:

When my co-workers hear me singing, they stand there amazed and say things like:

"How did you know that song?"

Last week we took our daughters to see "The Simpsons Movie." When we got home, the girls got on the computer and downloaded a picture of me onto a Simpson/Burger King website. Miraculously, this site somehow converts photos into "Simpsons" characters, (see my picture above.)

Click on this link: http://simpsonizeme.com/ and you can become a Simpsons' character too.
Posted by Bobby at 11:22 AM 5 comments: