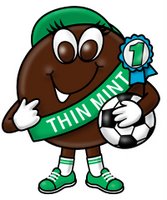 Every March for the past six years or so, I’ve been pedaling Girl Scout Cookies up and down the railroad’s New Haven Line. I usually leave a couple of cases in the stationmaster’s office in New Haven and bring a couple boxes with me to sell to my coworkers in New York. The cases are adorned with signs that my wife prints up. They have pictures of the cookies on them and read: “Please support your local girl scouts” $4 a box. I leave an envelope and use the honor system for payment.

My daughters and I used to sell these cookies the old fashioned way. We’d go door to door and call up relatives for orders. Now my daughters complain that the driveways in our neighborhood are too long and that dad insists on stopping and talking to all the neighbors.

It was hard to generate many phone sales this year. My wife’s Aunt Ginny, who was one of our best customers, passed away last year. My brother Jimmy, who was also a great customer, now has to watch his sugar intake. We could always depend on my nephew Danny but this year he is on a gluten-free diet. Even my wife and I didn’t order as much as we usually do. We’re watching our carbs.

It’s against company policy for me to solicit cookies on my trains plus the panhandlers don’t like the competition. Occasionally a passenger will see me carrying a case of cookies and ask to buy a box and who am I to deny them the pleasure of Thin Mints, Samoas, and Do Si Dos.

If you’re not familiar with the different varieties of Girl Scout Cookies, let me give you a run down.

Thin Mints: This cookie is about as American as Mom and apple pie. In fact, if you don’t like this cookie, George W. Bush will call you an evildoer and route you out.

Samoas: The best coconut, chocolate, caramel cookie, ever named after an island in the South Pacific.

All Abouts: Basically a Trefoil on a bed of chocolate. A cookie that’s trying to say, “Look at me, I’m not boring, I have a layer of chocolate on one side” But ultimately, it’s the Bryant Gumbel of the cookie world.

Tag a longs: Another peanut butter cookie that judging by its name, must be Do si dos kid brother.

Lemon coolers: The low fat cookie. I figure if you’re going to spend $4 on a box of cookies…you might as well pile on the fat.

I’m not sure how I became the main salesperson for these cookies. It may have been when I arrived early to pick up one of my daughters from their troop meeting. I believe her cult…ah I mean troop leader may have indoctrinated me. Against my protests, she demanded that I join them at circle time at the end of the meeting. We stood in the circle, crossed our arms and held hands. I expected to start singing Kum-Bai-Ya but instead we started squeezing hands. The scout on my right squeezed my left hand and I in turn squeezed the hand of my 11-year-old neighbor on my left. We took one step forward with our right foot as the troop chanted the Girl Scout Pledge. This whole exercise made me feel like a cult member at Jamestown. I prayed they wouldn’t bring out the Kool Aid next.

On second thought…I’d never have to sell Girl Scout cookies again.
Posted by Bobby at 9:43 AM

When I was a Girl Scout, one time during the Girl Scout circle at the end of the meeting, a girl peed her pants. Since we'd all been squeezing hands, person to person, as described in your post, I immediately - logically - thought that the squeeze had somehow escaped our hands and "spilled out" onto the floor. This would, of course, mean it had turned liquid. Specifically, that the squeeze had turned to, well, pee. After a few minutes I figured out what had happened.

You should have sent them my way. I like the way they promote the crack-cocaine as "peanut butter" in the Tag-a-longs. I can easily pound 18 boxes.

When I was a Girl Scout, I never could compete with the girl that had her dad sell all her cookies at work! Those girl scout leaders/counselors at camp can be kinda mean...I still have "issues" with spinach...the girl scout counselor at camp forced all campers to eat everything on their plate before leaving the table and spinach sure doesn't taste like cookies. Funny that we never had girl scout cookies at camp...I coulda gotten into even the trefoils instead of spinach!

As "Troop Cookie Mom" four years in a row, Bob, you'll be happy to know that I am hanging up my Cookie Mom hat this year. I am retiring. Well, as soon as we finish our Cookie Booth at the local Stop & Shop!

Next year I'll just order what we need (no, let me rephrase that..what we WANT). No pressure from me. Of course, I know your youngest daughter will still EXPECT some help so she can earn her coveted prizes!!!

Did you ever see the "Everybody Loves Raymond" show when Ray gets into a fight with the Girl Scout Leader, Peggy? She beats him up when he takes the best location to sell the cookies in front of Marco's Pizzeria.

Thanks a lot, Bobby. I asked you to take the check and give the cookies to someone else (think Justin). But noooo. I just finished the entire box of Tag-a-longs in one sitting. I will bring the other boxes into work so I won't eat them all myself.

P.S. Danny is on a "gluten-free" diet. If I stop eating the cookies, I will be on a glutton-free diet. Don't hold your breath.