"So...Where are you going tonight?"

Sometimes the question doesn't even need to be asked. Take the hoards of people dressed head to toe in Yankees or Rangers uniforms who board my train for example. Groups of young ladies going to bachelorette parties are also pretty easy to spot (they're the ones huddled in the five seaters, sipping margaritas from penis shaped straws). Most of the time though, passenger's evening plans are not so obvious, so I ask...

"So...Where are you going tonight?"

Most people simply answer "New York."  That's when I  roll my eyes and say; "Yeah, I know that!!!  But what do you intend to do once you get there?... Are you going out to dinner?... Maybe going to see a Broadway show...?

People seem to be a little put off by my intrusive questioning, but they want to be nice to the prying conductor, so they'll avoid eye contact, and say something like..."Just going to meet some friends for dinner and drinks."

Sometimes my customers surprise me though, and they give me very candid answers. (Flashback scene; "Initiate super-wavy flashback effect!".)

One afternoon this past summer, a lovely, fit, dark haired woman in her mid-30's was on my train.  She was very stylish, dressed casually in black clothing (the required New York uniform).

"So...what are your plans for this evening?"  ( Sometimes I like to mix up my Inquisitions.)

"I'm going to an Intervention." She answered without hesitation.

"Come again?" I thought I'd misheard her.

"My old college roommate is in an abusive relationship, and my friends and I can't standby and watch it happen anymore...so we're staging an intervention."

"Wow!" I said.  "That takes a lot of guts. You do realize this whole thing could blow up in your faces, and you might lose a friend tonight."

I congratulated she and her friends on their courage and concern, and I wished them, and her abused friend the best of luck.

"So...Where are you going today?" I asked, anticipating that he might need the assistance of a wheelchair in Grand Central.

The man said he was going to Manhattan to meet up with a group of disabled rescue workers from Ground Zero.  He explained that he was a retired fireman from Massachusetts who had volunteered as a rescue worker at the site of the former Twin Towers buildings in the days after the terrorist attacks.  Years later he developed "lung problems" like so many of his fellow rescue workers.  He now volunteered his time on the board of a 9/11 disabled rescue worker's group...a group that was getting smaller and smaller by the day due to all the illnesses that had befallen the membership.

Recently I had a cute freckled- faced blond girl on my train.  I thought she was a college co-ed, since she looked not unlike the uber-chic teens in the pages of the Abercrombie and Fitch catalogue .

She looked so young, I half expected her to say ...I'm going to a sorority party, or maybe,  I'm going to a Taylor Swift  concert.

"I'm going out to dinner with some friends." She answered.

I told her that I was writing a post for my blog, and that if she wanted to appear in the pages of "Derailed" she'd better come up with a better answer than that.

"Well how's this? (She really seemed to want to be in this story.)

"It's my first day off in three years!"

"Yeah, I'm a surgical resident at Yale, and we never get days off."

"I wish! She laughed, now pulling her work ID out of her back pocket.  Sure enough, her name was prefaced with "Dr." 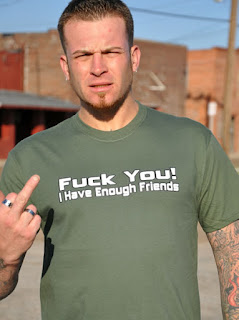 Speaking of being old...When did I become "That Guy?"  Remember when you were in your twenties and you and your friends would go to a concert, and inevitably,  some middle age guy would stop you outside of the concert hall and ask who your were going to see?  You and your friends didn't want to be rude, so you'd tell the guy the name of the band, and without fail he'd say..."Never heard of 'em." Fast forward 30 years and I've become THAT GUY?  For reasons I can't explain, I insist on asking my young concert going passengers what band they're going to see, only to end up commenting.... "Never heard of 'em."

Unbelievably, there are some passengers who just don't seem to want to get questioned by their conductor.  Take the guy I had on the train yesterday for example.  He left his ticket out on the seat, his eyes were closed,  he was wearing headphones, and a tee shirts that read "F#@K YOU! I HAVE ENOUGH FRIENDS." Yeah...I have no idea where this guy was going.

.
Have a look at my web-site metal finishing jobs

I wish I could find some MBCR conductors as talkative as you! Some of them just don't like to be friendly with passengers, but I figure I might as well get to know the people I ride the train with week after week.

I agree with Tyler - I never have chatty conductors on my trains! :(

Expanding upon my last comment: And when one rides the last train to Waterbury at night, they see said conductor and try to read the name tag dangling from around his neck to see if he is in fact the voice of Derailed ;)