October 16th:  A guy boards my train in New Haven and when he opens his wallet, I see a yellow "Post It" note glued to his credit cards.  It reads; "New Haven Taxi 777-7777".  I find this funny. I don't always remember phone numbers...but I'm pretty sure I could remember this one.

On my go- home train, the emergency window in the "quiet car" is making a racket.  The weatherstripping around the glass is loose and the pane is rattling like crazy.  My passengers look annoyed.  Like MacGyver, I quickly grab seat checks out of my pocket and shim the small pieces of cardboard between the glass and the rubber gasket that surrounds it.  The window goes silent and the passengers cheer. I'm the hero of quiet car. 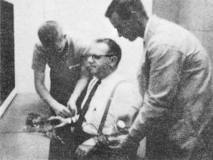 October 17th:  I meet up with author/journalist Sandi Kahn Shelton at Starbucks.  She is interviewing me for an article in The New Haven Register .  The story is about my father's participation in the famous "Obedience to Authority" experiments by Dr. Stanley Milgram.  Milgram conducted these experiments at Yale in 1961-1962 to observe how obedient people were when following orders from an authority figure.

Between sips of her iced tea and my Grande Vanilla Chai Latte, Sandi tells me how much she loves my blog and writing style.  She is one of my favorite writers, so this is a HUGE compliment.  It's a wonder that my big head fits through the door of the coffee shop. We agree to meet at Yale's Linsley-Chittenden Hall (where the experiments were conducted) the next day for a photo shoot to accompany the newspaper article.

Wednesday evening- October 17: My train hits a trespasser and I have to go out and search for the body... And that's all I have to say about that.

October 18th:  I wake up with a knot in my stomach, remembering the previous evening's activities.  I get a call from a counselor from the railroad's employee assistance program.  She says she's sorry that I had to go through the trauma and asks if I want to come in and discuss my feelings.  I thank her for the offer, but tell her that this is my third fatality in my 26 years on the railroad...and that I think I'll be okay.  She encourages me to take three days off (regular procedure whenever crews are involved in a fatality) and I tell her that I will.

They say that railroaders average three fatalities in their career.  This was my third and hopefully last fatality. I'm done.

After breakfast, I drive to New Haven and get stuck behind a Connecticut Transit Bus, then spend the next 10 minutes staring into the eyes of Attorney Jonathan Perkins, a personal injury lawyer whose giant face is plastered on the back of the bus in an advertisement for his law firm.

Attorney Perkins was on my train one day this past summer, and I told him that his head was much smaller than the buses advertise.  He laughed...well he kind of laughed. 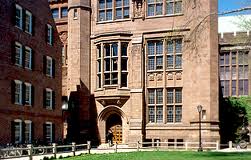 I search for Linsley-Chittenden Hall and find it right smack dab in the middle of Yale's old campus.  It's a beautiful Gothic looking building, all brownstone, decorative spires and Tiffany windows.  I've never been here before, but know that my father's experiment was done somewhere in the basement of the building.  I walk down a set of dimly lit steps to the basement which befits a medieval castle.  I open heavy wooden doors but can't find a room that looks like the experiment lab.  There are no plaques on the wall  designating it as the site of the Milgram experiments (due to the unethical nature of the experiments, Yale is not exceedingly proud of it). I find an office upstairs and ask a secretary if she knows exactly where the experiments were conducted.  She says she thinks they were done "at Berkeley...out in California".  I tell her that, "no...the experiments were done somewhere right beneath your desk."

I go back outside to wait for Sandi and the Register photographer and I hear someone shouting "GERONIMO!!!.....GERONIMO!!!"  I instinctively start looking up at the tops of nearby buildings waiting for someone to jump (when I was a kid, we always yelled "Geronimo!" before jumping off of something...I'm not sure why.) 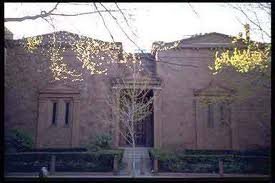 "GERONIMO!!!"  I look across the street toward the sound of the shouts and notice a drunken Native American standing in front of a brownstone building that I recognize to be "The Skull and Bones" tomb. "GERONIMO!!!" he shouts again, now shaking his fists.

I recently read that the notorious Skull and Bones Society (a secret Yale fraternity that counts several U.S. presidents and Supreme Court justices among its members),  has the famous Native American warrior's skull deposited somewhere inside this tomb.  Understandably, Native Americans want the skull back to give it a proper burial. 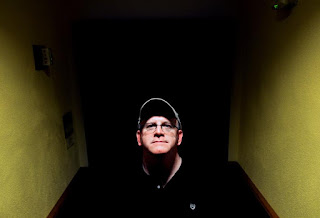 I meet Sandi and Arnie (The Register photographer) and Arnie takes several shots of me somewhere near where the experiment was conducted (I never found the exact location). He keeps having me look up toward the ceiling light and I don't understand why. A few days later, I see this spooky...but very cool picture plastered on the cover of The New Haven Register. Photography is all about shadows and light.

October 19:   I drive up to the Connecticut State Library in Hartford to do genealogy research.  One of those big car carrier trucks catches fire just ahead of me on I-91, and I see giant plumes of smoke about a quarter mile up the road.  The conflagration shuts down the highway and I sit in traffic for 90 minutes.  I finally make it to the library, and find that keeping busy takes my mind off of the Wednesday evening's activities.  Searching for dead people in files, microfilm, and computers is fun.  Searching for real dead people is not.  The irony isn't lost on me.

October 21:  Sandi's article appears on the front page of The New Haven Register.  I'm exceedingly pleased with how it turned out, so I link the article to my facebook page.  I then spend the better part of the day checking my status updates waiting for people to comment.  I laugh at how narcissistic this behavior is...and ask my wife if she thinks me a narcissist.

"You think?" She answers sarcastically.

October 21:  I'm finally back to work, and they have me covering the 1:15AM train out of Grand Central.  This train is always entertaining...and so dysfunctional that it should have its own blog.

When I start collecting tickets, I notice a 20-something African American couple making out in the middle of the train.  By the time I approach to get their tickets, the man is standing in front of his girlfriend and his belt is unbuckled.  His pants are riding down around his thighs and they're about to commence a sex act.

The guy pulls his pants up and buckles his belt.  He and his mate apologize and they assure me it won't happen again, but as soon as I turn my back, I hear the belt unbuckle and he's standing up in front of her again.

"What did I just tell you?" I shout.  "Pull your pants up or I'm going to have you arrested."

Now the woman apologizes, saying they just got engaged and they can't help themselves.  By now the surrounding passengers are shaking their heads in disbelief.

Halfway through the ride, I notice the amorous couple have moved their seats to the head car of the train, which is now devoid of passengers.  I contemplate confronting them again (I assume they were back at it)...but it's 2AM, and there's no one else around. It's been a tough week, so I decide a "don't ask-don't tell" policy is the best way to go.

Sorry to here about the trespasser you had to deal with! I think I was probably on the train behind yours that night. My train was stuck around Greenwich for a half hour or so.

Wow, Bobby, your week had a little of everything thrown in: fame, notoriety, life, death, genealogy, traffic jams, Yale myths, dysfunctional train-riders, and a latte! You write about it all with such amusement. Your posts are always entertaining and wonderful!

So sorry about October 17th. Hope you recover well.

Although I'm nowhere near being one of your favoritr writes, I too, am so intrigued by your blog and writing style. I Look forward to every episode!

"Sandi tells me how much she loves my blog and writing style."

Wow! My husband is a conductor out of Raleigh....in 10 years he's had about 20! I don't know how y'all do it! I found your blog googling for info about Sarah Holcombe. We had jus watched Caddyshack. Anyway, interesting blog!!! I'm passing it on to my hubby!! Serene