Note to self:  Sometimes I'm naive. 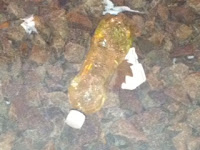 Whenever I'm walking along the tracks, I notice copious amounts of plastic water bottles filled with yellow liquid.  I always assumed these bottles were filled with sports drinks like Gatorade or Powerade, and I thought it careless that so many of my railroad brethren would litter and be so wasteful.  I mentioned my concern to an engineer one day...and he gave me one of those, how stupid can you be? looks.  He explained that engineers don't always have time to run to the lavatory when they're running a train and sometimes they have to make do. A lot of them keep an empty plastic water bottle in their railroad bag for such emergencies. I won't go into all the disgusting details here, but let's just say,  it's not like they can flush in the engineer's cab, so any open window will do. After gagging,  I thought of all the times I sat in these cabs eating my lunch. I guess I need to start carrying an industrial size bottle of Purell.

Note to self:  Some people are lazy.

One of my passengers got off the train in Noroton Heights shaking his head in disgust.  He came up to my cab window and grumbled, "Your engineer pulls down too far on the platform."  I wanted to respond; Well, the people who parked toward the head of the train think my engineer spotted the train perfectly.  It was obvious though, this guy didn't care about them...he only cared that he had to walk an extra 170 feet further than he expected to his BMW in the parking lot.  I'm sure in Manhattan this blowhard treks three city blocks for a dirty water dog, but ask him to walk an extra couple of train car lengths and he gets all bent out of shape.

Note to self: Drunks are stupid.

I had two drunk Yankee fans returning home from the stadium last night.  I noticed that their tickets were emblazoned "Yankee Stadium E 153rd / Brewster"...as in Brewster, New York.   "Gentleman," I said, "We have a problem here.  Stamford, CONNECTICUT is the next stop for this train."  The younger of the two drunks looked up at me with one eye open and said "Bullshiiiiit!!!" His friend agreed, and he deemed me "full of  shit." Obviously they thought I was playing with them.  "No...Really!" I said... and then I thought; Why am I arguing with these drunk idiots?  Normally I try to accommodate my wayward passengers and see if I can possibly get them off on the nearest platform, but there was something about the way the younger drunk said "Bullshiiiiit!" that annoyed me.  I guess they finally believed me when we pulled into Stamford Station, as evidenced by the pounding they gave the garbage cans on the platform.

Note to Self:  Some people are rude. 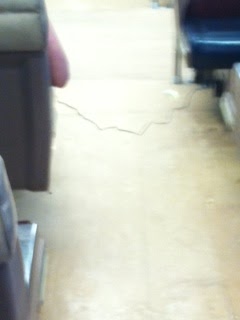 Yesterday, a woman got on my train and immediately plugged the cord of her smart phone into the power outlet. Apparently only the phone was smart, since she sat across the aisle from the outlet, leaving the cord to dangle like a trip wire just inches off the ground blocking my, and everyone else's, well worn path.   I approached her and told her that the cord was blocking the aisle and she'd either have to move her seat or unplug the cord.  That's when she sighed, looked up and gave me an annoyed look...a look that said; Why are you hassling me?

On this same train I had a guy wearing headphones who missed his stop. He hadn't heard my several announcements for passengers in the rear two cars to walk forward because he was blasting Jay Z into his ears.

Note to Self: Some people are still honest in this world.

A family from India was visiting on my train this week. The thirty-something year old son handed me tickets for he, his wife and his parents. I noticed he seemed a little unsure about something, then he spoke in broken English; "I bought my father a senior citizen ticket...but I'm not sure what the railroad considers a senior citizen." I told him that the railroad considers 65 and over a senior. He told me that his father was only 64 1/2, and he quickly pulled out his wallet and paid the difference. This was a refreshing change from the bearded, balding men who regularly hand me tickets marked "Child."

Note to Self: My faith in humanity has been restored.
Posted by Bobby at 12:33 PM

Keep 'em coming, Bobby! Even what you likely figure to be mundane encounters are an entertaining just the same!

It shouldn't be too hard to empty those bottles when you're stopped or going slow.

Sadly, this isn't the first time I've seen someone plug their phone in that way. I just don't get why they give attitudes when asked to remove it or move.

I'm glad I'm not the only person who finds that "What happened?" question irritating. When did "what happened?" become the new version of "excuse me", "pardon me", or even just "what?". It's everywhere now. And 9 times out of 10, it comes from some idiot on life support equipment...I mean, headphones. (Well, they act like they'll die if they take those stupid things out of their ears for more than 2 seconds)

I'm a Boston commuter, and I've been riding the trains in and out of the city on and off for the past 20 years (since I was a kid.) I know the routine.

As a more frequent college commuter, I always wrote my "home station" on my 10-ride ticket in Sharpie. That way the conductor knew where I was going, and that I wasn't about to pop up for a flag stop 10 seconds before we got there. (There are two request-only stops on the line for certain trains at rush hour. Usually I'd try and be alert, or at least acknowledge the conductor in some polite manner, but there were a few days where I just piled into my seat in the quiet car with my headphones on.

As a long-time commuter in Boston, I got used to the routine of traveling. There are two demand-only stops on my route going home (I'd call them flag stops, but I'm not sure that is a current railroad term), so I'd always write my stop on my 10-ride ticket, so the conductor knew where I was going. I figured it saved them from asking the same question for the hundreth time in the car, and for the occasional day when I was one of those "grumpy people" and it was best to keep quiet.