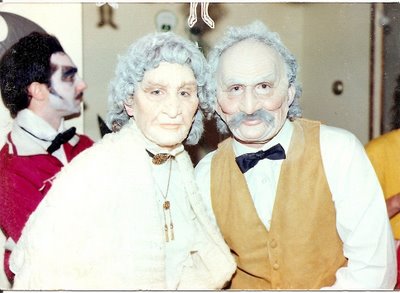 This picture came from a Halloween party my wife (then girlfriend) and I attended at a friend's house way back in 1983. What made this evening so memorable, was that we kept our identities hidden from our friends for the better part of the evening. We still socialized with other guest, but we talked in coarse, old people voices. We were really surprised when others couldn't figure out who we were. We finally had to give ourselves up when friends started to become alarmed at our absence from the party:

"Where are they?" Asked Frankenstein.

"They definitely said they were coming," said Frankenstein's bride.

"Too bad, I wanted to suck their blood," said Dracula.

It was kind of fun being virtually invisible for a while. We got a rare opportunity to see how our friends acted when they didn't think we were around. Of course this was a dangerous game we were playing, and it could have backfired on us. Our friends might have said:

"Who cares where they are?"

"I never liked them anyway."

As it turned out, we weren't the only ones playing this game that night. Alone, in the corner stood a red devil pounding down drink after drink. It was assumed that like us, he too would eventually divulge his true identity...but he didn't. At the end of the evening, the party hostess finally asked him who he was.

"Oh, you don't know me," he said. "I was coming from a boring party down the road and saw your lights on. It looked like you guys were having a lot of fun, so I thought I'd drop in. Thanks for a great party."

He then dissappeared as mysteriously as he appeared.

I would certainly have been one of those who would have said something I regretted... "Oh they're not here yet? That's okay, have you noticed that they smell bad".

I would have had to avoid you and and your wife for months.

I've never met your wife, but today if you put the mask on for holloween, I would ask you "Where's your mask McDonough?"