One off the disabled list...and another goes on.

This is the scene that unfolded in front of my wife and I, as we returned home from my "return to work" physical following double-hernia surgery.

"Achoo!" A man standing the vestibule convulses in a sneeze. He's carrying an armful of boxes, and is stricken so suddenly, he's unable to cover the burst that spews forward.

"HEY...TRY COVERING YOUR MOUTH WHEN YOU SNEEZE!" Shouts a man in a nearby seat. "I just got back from a week off being sick, and I don't need you sneezing on me."

The man with the boxes chooses to ignore the seated passenger's protests, and when the next station stop arrives, he steps out into a clear cool night...free to spew wherever he chooses.

"BARBARIAN!" The seated man shouts after him.

Margaret is a 60 year old construction worker who rides my train on a regular basis. Like the lone apple amongst the three bananas in the old Sesame Street game..."One of these things is not like the other" Margaret looks out of place amongst the grizzled hard hats she boards the train with; looking more schoolmarm, less material elevator operator.

"Hey Margaret," I ask. "How are things on the elevator?"

"No Margaret...Wrong answer!" I chastise. "Remember the answer we practiced?"

"Ugh... Okay, let's go over it again." I instruct. "Whenever someone asks: How are things on the elevator? You answer...It has its ups and downs."

Margaret gives me a nervous smile, and I tell her that this joke is pure gold. "Think of it as one of the benefits of your job...a kind of perk, like an HMO or a 401K plan. It's kind of like when someone asks me 'Are you still working on the railroad?' I answer... 'All the live long day."

*Names have been changed in the following story to protect the innocent.

Garth, my assistant conductor, approaches me with a weekly ticket in his hand. "Look at this " he says, holding out the ticket for me to inspect. I briefly peruse the ticket and see that someone has taken a magic marker and crudely altered its expiration date from 11/13 to 11/18.

Garth says that he told the ticket holder (a high school aged girl) that her ticket was obviously altered, and that she'd either have to pay the fare or get off the train at the next station stop. The girl refuses to do either, so I call for police assistance. The rail traffic controller tells me that the closest available police are in Westport. We're in Darien.

At South Norwalk, two stops before Westport, I notice three girls stepping off, and then back on the rear car of the train. Step off...step on...step off...step on...step off...etc. Finally Pam, a 61 year old assistant conductor, appears at the door of the rear car. From a distance, I watch as silent words are shouted and fingers pointed. All at once the situation escalates. The girls (one being Garth's fare evader) rush Pam with flailing arms and swinging book bags. Pam raises her hands defensively, but the girls are on her like bees on honey. They slap, punch and pull at her with all their might.

Like a play by play announcer, I get on the radio and describe the unfolding situation to the rail traffic controller and say that we need police assistance at South Norwalk station.

Garth pokes his head out the window, just in time to see his fare evader (and two others) run into South Norwalk Station. I'm too far from the altercation to give chase and the perpetrators soon blend into the departing crowd of commuters, never to be seen again. Well almost... remember folks, this is 2009...and big brother is always watching. The MTA police have surveillance photos of the three girls running through South Norwalk Station and today they distributed "Wanted for assault" flyers throughout the railroad. 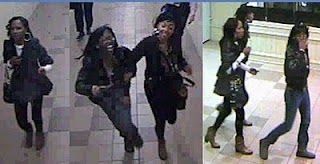 2X Hernia op?!!! Didn't know, but missed your posts in your absence. Jeebus, that's a harrowing story about your co-worker. Is it me, or are girls fighting a lot more these days?

Glad to have you back and hope you and the family have a great Thanksgiving!

Stamford Advocate article about the assault http://www.stamfordadvocate.com/localnews/ci_13826713?source=rss including pictures of the suspects

terrible! i hope pam is resting and on the mend. i am so very sorry that this happened to her!

On the LIRR we can stop the train at any station and request police assistance. we usually are not told to keep going to a certain station. why couldn't you just stop at the next station and wait for the police to come to you? is metro-north more concerned about OTP than crew safety?

Remember, this was intitially a fare evasion problem, and the girl's ticket had Bridgeport stamped as her destination. Had the destination shown So. Norwalk, I would have been instructed to hold the doors and wait for police assistance at So. Norwalk. Yes, on time performance is the reasoning behind this strategy, but at the time, there was no way of knowing the fare evaders were going to assault a crew member.

Oh man I had heard this story, crazy to hear that it was your train! By the way, good to have you back, was wondering where all the spectacular posts were! Missed them :D

PS - I laughed while reading your "all the live long day" very awesome.

Ever get them? Will they be made an example of? This has got to stop!

Thought you'd be interest - they finally caught them...

Thanks for the info.
Well, I guess the 17 year old will get a "walk", and I hope the 18 year old pays dearly for the assault. BUT--we'll see.
BTW, is this the first assault under the new law?
Where's "Dirty Harry" when you need him? ;-))

Barbarians! Glad to hear they've been caught. My best to Pam

Minott and Hargrove are to return to court Jan. 12.

Anything happen on the scheduled court date of 1/12?

Did they catch them?

I worked with "Pam" before. She was always nice and about her business. I'm out sick. Has anyone at the job heard from her? Did she come back?

Yes, I'm happy to say "Pam" is back at work. Unfortunately, she can no longer bend her finger.