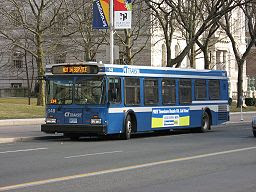 It’s Friday afternoon and I’m standing outside a Connecticut Transit bus in Waterbury. A little guy who’s covered in paint, maybe 60-years old, approaches me. He looks a lot like mass-murderer Charles Manson.

“Yo dude!” He says. When’s the next train to Derby?”
“There is no train,” I explain. “They’re doing track work on the line. You’ll have to take this b

He takes a puff of his cigarette, chokes back his alcohol tinged breath and asks, “Yeah…but when’s the next train to Derby?”

“Oh…sometime in mid-August” I say.

He exhales, blows smoke in my face and says, “Yeah…but really, when’s the next train?”

We went on like this for several minutes till I finally lost my patience, raised my voice and said, “Listen…either get on the bus or stay here.”

Charlie doesn’t like my attitude, but he finally puts out his cigarette and climbs on the bus/train. He sits down next to me, and the smell of smoke and stale beer permeates the air. His cell phone rings:

“About half an hour.”

“No wonder it’s taking so long,” I say. “If I had that deal…I’d be painting with a toothbrush.”

“Yeah, I know” says Charlie, “But three weeks is long enough. I need to get paid. So today… I’m paying them a little surprise visit and I'm gonna see what's up.”

Charlie’s phone rings again: “Yeah…don’t get nervous…I’ll be there in like 15 minutes.”
“Sorry about that,” Charlie says, “but the crew’s picking me up at the station, and they’re a little nervous.”

“That’s not much of a surprise visit,” I say.

“Yeah…well” he stammers. “I have to make do. The cops took my license a few months back. All because of a burned out tail light.”

I sit there waiting for part two to this statement. Something like:

“All because of a burned out tail light …and a blood alcohol level twice the legal limit.”

“All because of a burned out tail light…and a dead body in the trunk.

But no part two is offered, and I’m afraid to ask any more questions. Instead I imagine different contractors plying their trade from a Connecticut Transit bus…maybe a mason storing bricks in the overhead rack…a carpenter piling 2x4’s in the aisle…an electrician with romex wire wrapped around one arm while pulling the stop cord with the other.

I awaken from my day dream and say, “It must be hard to be a painting contractor, and have to rely on public transportation. I mean, what if you were a plumber? Where would you put your pipes?”

Charlie ignores me and his phone rings again. “Jesus Christ!” He shouts.

“Yeah…I’ll be there in like five minutes. Don’t forget to caulk the nail holes on the molding. Just take a wet a rag and wipe off the excess.”

Ten minutes later we pull into Derby Station where Charlie’s minions are anxiously awaiting his arrival. They seem happy to see him…maybe a little too happy. A bearded man greets him with an “I’m not worthy” bow, while a braless woman bounds out of an green Chevy van with a ladders on top. She plants a big wet kiss on his mouth.

I check their foreheads for swastikas.

Charlie’s “family “jubilantly jumps into the van, and it recklessly swerves in front of our bus. It’s then I notice…a tail light is burned out.

Bobby, you paint pictures with your stories. Thank you.

On behalf of every conductor who has ever had to ride one of those CT Transit buses, whether on the New Canaan, Danbury, or Waterbury, thankyou, that story was absolutely awesome. One of your best yet.
-General McClellan-

Thank you for the story. This was very entertainning. Keep them coming about the Waterbury Branch. By the way you said bus/train. Its the Train-Bus. Eh call it what you want. Just keep these stories coming. And dont forget to come and stop by on my blog.

Just be happy he didn't somehow lure you into the cult with his mesmerizing cigarette breath and lawbreaking charm.