A cautionary tale of how a teddy bear killed my grandfather...and eventually led to my existence. 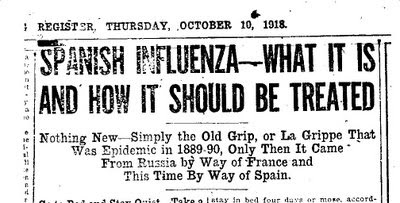 A teddy bear killed my grandfather...at least that's the story I was told.
The truth is a little more complicated.

It was an unseasonably cold evening in early October, 1918 when E 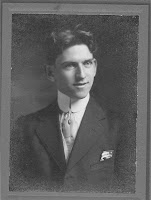 mmett McDonough (my grandfather) stood before his orchestra at a Wallingford, Connecticut dance hall for his clarinet solo. He was well known in the area as a musical virtuoso and everyone was eager to hear him play. The crowd was in especially good spirits that night, since newspaper headlines shouted that World War I would soon be at an end.

A group of teen-aged girls began to foxtrot in front of the bandstand and one girl (I'll call her Mary) began tossing a teddy bear to her friends. Teddy bears were all the rage in 1918, so it was no surprise that she'd bring one to a dance. After several tosses, Mary lost her grip and the bear tumbled airborne toward the bandstand. Emmett, now finishing his solo, was hit square in the face. He picked up the teddy bear and handed it back to young Mary.

Just two days after the dance Emmett began to cough and felt a general malaise. By mid-week he was bedridden. Jimmy, his three year old son, was sent to stay with relatives. Emmett's wife Nellie (my grandmother) could do little more than drape him with cold compresses and put Vick's VapoRub on his chest (yes, it was around then). By week's end he'd taken a turn for the worse.

The flu was now wide spread and people were dropping left and right. Young Mary, the teen-aged teddy bear owner, was one such victim. Speculation says that Mary must have sneezed into her teddy bear's fur, leaving droplets of live virus that my grandfather inhaled.

*The Spanish Influenza started as an avian virus which spread from

bird to man, then horribly mutated and spread from human to human. It was an especially virulent strain. The dead included not only the elderly and infants but also robust adults in the prime of life. It's estimated that this pandemic killed 675,000 in the United States and as many as 100 million world-wide.

The country was now in panic mode, and all of the area hospitals were full. Sister Winifred, my grandmother's sister, was a nurse/nun at St. Francis Hospital in Hartford and was able to pull some strings to get Emmett admitted. It was too late though, by now his lungs had filled with fluid and he was essentially drowning. He died from pneumonia on October 10th 1918. 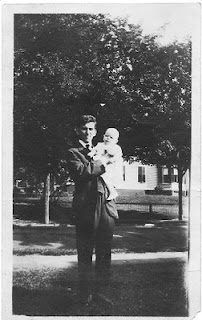 He had just celebrated his 29th birthday.

Nellie never remarried, which left their son Jimmy (my father) an only child. Without any substantial means of support, they shuffled from house to house living with a series of Nellie's sisters and family in Wallingford. My father would later say that it was a lonely existence and that he hated being an only child. That, in part, is why he had nine children. The youngest being me.

So when you think about it, I guess I owe my existence to...a teddy bear.

Ok then, guess I'll be paying attention to this swine flue thingamajiggy.

Well written sir! Another great way to ensure family history survives: Have 9 kids. M&P had five of us, but I don't think it was to preserve a good familiy yarn:-)

I actually think I see wee bit of a resemblance between you and your dear grandfather!!!

Not all teddy bears are for hugging. Thanks for sharing but the flu took a loved one away.

Glad your dad was able to survive and produce the McDonough clan and especially the 8th wonder of the world.

Thanks for bearing it all.

What an amazing story, and you tell it so well Bobby! I'm actually reading a book right now largely about the 1793 Yellow Fever epidemic nearly Philadelphia. They're difficult pasts to imagine, and hear about, but it's also wonderful there are still people here today that can share their significance :)

Wow what an amazing story. Its interesting how fate through a teddy bear helped bring you into existence. If not then you would not be one of my favorite conductors.

Interesting story. Most of the time we have no clue how we caught something. Its interesting too that teenagers had no shame at tossing a teddy around. Nowadays if an adult is seen with a teddy bear anywhere out of a store shopping trip they are looked at as strange. Perhaps if we let that inner child out more the world would be a happier place. As long as the bears are not plague carriers of course!

Bob, you are such a wonderful story teller. So sad that such an innocent gesture led to the death of such a young man. I hope that Wallingford was a safe haven for your Grandmother and Dad. We are grateful that your Mom and Dad didn't stop at eight.