The more things change...The more they stay the same

Some things have changed over my 22 year on the railroad. For example, when I began I was always given the unpleasant assignment of working the smoking cars (the 3rd and 5th car from the west/south end of train, or any bar car.) It was difficult to see tickets through the clouds of smoke and I frequently came home red eyed and smelling like a wet ash tray. I jumped for joy when they banned smoking.

It's hard now to believe, but back in the 80's, Grand Central was a glorified marble urinal for the homeless, and it seemed that beggars outnumbered commuters.


How about drinking at Lindy's, or buying a cup of coffee at Eclair?


What about the giant Kodak Colorama sign that towered over the east end of the GCT concourse? I used to get excited whenever they changed the photo.

Remember leaving your bags unattended and not having to say something when you saw something?

In more recent years there have also been changes.

With all these changes, it's comforting to know that some things stay the same: 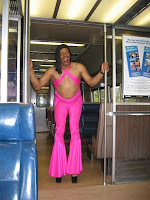 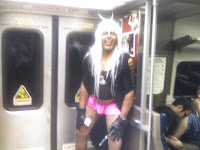 Rocky is arguably the most well known, and notorious passenger on Metro North. He rides all three lines and all the conductors know him. I've known Rocky since he was a crazy, mixed up teenager. Back in the day, he used to dress as a male, but he slowly began to change. First came the Tina Turner wigs, then the platform shoes. He eventually graduated to hot pants with "boy toy" plastered across the back.

I remember him telling me of one memorable Thanksgiving, when he he "dressed up" for his grandmother. It nearly killed her.

He was on my train last week and I asked if I could take his picture (bottom) and post it on my blog. He agreed, but said that I was crazy to put a picture of a cross dresser on the Internet. He was dressed in a micro mini, a thong, and was wearing 12" stiletto heels when he said this...and I'm the crazy one! 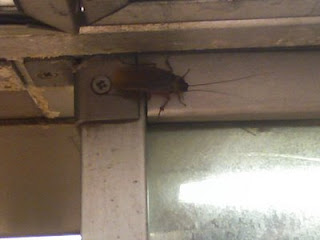 This is why my wife doesn't want me wearing my work boots in the house. You know, eggs, larvae, etc...

I was working a Stamford Local when a passenger spotted my friend here,"ROACH!!!" he screamed. I'm no Entomologist, but I was going to correct him and say that this is technically a water bug (at least this is what my New York co-workers call them), but then, after doing some research for this story, I found out that he was right, this is a roach- an American Cockroach to be exact. Not to be confused with the smaller, German Cockroaches, who also ride our trains. I think the passenger wanted me to kill it, but when the bug is big enough (two inches) to have its own zip code, I draw the line. Instead, I asked it to say "cheese" and I snapped its picture (above).

Here's something that hasn't changed in 35 years: 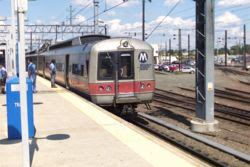 Rocky is one strange dude.He reminds me of Deacon Jones dressed up in a too too. I'm sure you could probably pull that up on the net. Deacon dressed up as a prank on one tv show.

Also I'm surprised you haven't taken a picture of the new and improved bar cars. They look to me like something one would see at a "Jimmy Buffet" concert.

Reminds me of a radio transmission I heard last Winter...

dispatcher "what have you got, over?"

man, you must be pretty excited for the new M8s...I just looked them up and they look sweet. 35 year old trains! Wow.

I feel for poor rail workers like you who have to put up with angry commuters like me when the equipment you struggle to keep rolling keeps breaking down.

It isn't your fault, it's the fault of our elected representatives we send up to Hartford every year.

we had those roaches in Virginia and North Carolina....they call them Palmetto bugs down there, but you are right...they are in fact the American Brown Cockroach...they are bigger and slower than your typical New York City cockroach, but they can fly!! I didn't think they lived up north.
I used to spray the inside of a toilet plunger with Raid and then trap them under there for a few minutes...the fumes would kill them so you wouldn't have to resort to squishing them. I also got pretty good at hucking a handful of shaving cream at them....completely immobilizes them.

That Raid/plunger thing sounds like a great idea for my wife to try. Could actually save me from having to come home to glassware turned upside down.

The fall always brings the damn palmetto bugs in doors. Drives me nuts.

About the roach: while living in Illinois, we had them at home, unfortunately. I hated them. The only "good" thing about these huge roaches, is actually two things: they don't make as many babies as the German roaches do, and they are much slower, so you can actually kill them - although that is truly a mess..

We got rid of ours, thank goodness... they are so big that they are truly scary looking. :-)