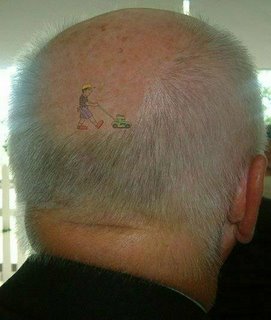 No, the above picture is not me!

David is a mentally challenged man who lives in town. He can be regularly seen pedaling his bicycle up and down Route 1. Almost everyone in town knows him by name, and he spends the better part of the day visiting (and pestering) the merchants up and down Main Street. He speaks in a VERY LOUD VOICE that some people find intimidating. Yesterday morning, he approached me (still wearing his bicycle helmet) in the local convenience store.

David: DO YOU KNOW WHO YOU LOOK LIKE WITH THAT BALD HEAD OF YOURS?

(The people in the store now turn to look our way, waiting for my reply.)

Me: Yeh, Yeh, I know…I know. You think I look like Captain Stubbing from The Love Boat.

(He tells me this every time he sees me.)

I tried to laugh off David’s left-handed compliment, but it really started to bug me. Gavin MacLeod (a/k/a Captain Stubbing) is like 32 years older than me. I usually don’t let the bald thing get to me, but it was the third time in the past week when somebody thought I was much older than I am.

It all started on Monday when I covered a conductor’s job on the Waterbury Branch. Train service had been canceled due to track work, and the railroad called in busses to shuttle people back and forth between Bridgeport and Waterbury. Whenever the railroad calls in busses, conductors ride along, collecting tickets and generally acting as a liaison between the bus company and the railroad. On this particular day, I worked with a pleasant bus driver named Eva.

Eva told me that she is a recent immigrant from Poland. She said that she’s been working as a bus driver for the past few years, but that she would like to get a job as a conductor. She told me she was afraid to apply because her English is, in her words, “Not so good.” I told Eva that I thought her English was fine, and that she’d make an excellent conductor. She then asked me the dreaded question:

(She then looked at my bald head)

“Yeah! Well at least I have all my teeth!”

(Okay, I really didn’t really say this…but I thought it.)

On Tuesday, I got a haircut at a barbershop across the street from Grand Central. This barbershop sits atop a Chinese restaurant that proudly displays roasted ducks (hanging by their necks) in their window. Beside the ducks hangs a sign that reads: “All haircuts $11.” (This would be a good deal for most people, but considering the amount of hair I have, it’s a rip off.) Beside the restaurant is a narrow staircase that leads up to a tiny barbershop with about eight chairs. The barbers that work here are of every ethnic background. Palestinians cut hair next to Israelis and Pakistanis in relative tranquility. They could really teach a lesson to the diplomats down the street at the United Nations.

It took my barber, a young Israeli, about two minutes to trim the ring of salt and pepper hair around my head. When he was done with my hair, he began trimming errant nose and ear hair. Before he finished he asked if I would like to have my eyebrows trimmed. “Might as well,” I said. I began to feel a little depressed when I realized that the barber had spent about as much time on my eyebrows, nose and ear hair as he did on my head. I said something like, “So it’s come to this, huh?”

How old you are? The barber asked in broken English.

This guy didn’t look a day over twenty but I wanted to play with him.

His face fell and he said, “No, I only twenty three.”

As I walked out of the barbershop he was staring at himself in the mirror.
Posted by Bobby at 1:54 PM

I think the guy deserves $11 just for cutting your nose and ear hair. EWWWWWWW!

It's not how old you look...it's how old you feel. Have you had the waitresses try to give you the senior citizen discount yet? My husband has had that happen... and he still doesn't qualify for that discount yet! The waitress couldn't get her foot out of her mouth and kept making comments that weren't all that helpful to defuse the original "senior" comment. I finally told her she should just not say anything else because he was the one doing the tipping! I have been grateful that I get the comments that I don't look my age...I just have to deal with the blonde jokes! I guess we all have our crosses to bear.

Now I see why you have chosen to chop off the top of your head in your profile picture! It's the bald issue!

I feel your pain! I once received a coupon for a free haircut, and was later told that I and all four of my brothers could use this one coupon and still get change back!...Brother Jimmy

so bobby - who is in the picture, it's clever - wonder if it a temp or perm tattoo?

That picture came from one of those "pictures to make you laugh" emails that float around the internet. I had seen it a long time ago but didn't save it. I started writing this post and by chance, someone sent me this picture again. It fit pefectly.

Don't you just love the idea of a little man mowing the back of your head? Too funny!

I am fortunate not to suffer the hair loss malady and have as much, albeit grayer and shorter, than in the picture that accompanies this post.