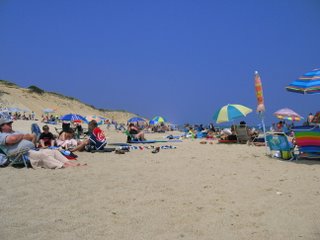 My family and I just came back from a mini-vacation on Cape Cod, and the whole time we were there, the above song kept playing in the back of my head. You may recognize it. It’s called “Old Cape Cod,” recorded by Patti Page in 1957. The song speaks of some of the Cape’s charm; the sand dunes, salty air, little villages, great seafood. These are some of the things we love about the Cape, but Patti left out some of my daughters favorite things. 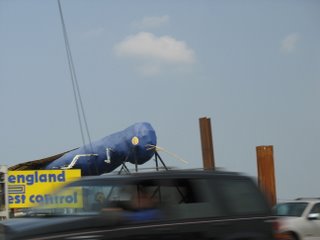 While driving through Providence, Rhode Island, on the way to the Cape, it has become family tradition for my wife and I to point out the giant insect that sits atop the New England Pest Control building. The bug has become a New England landmark, and my daughters can’t wait to see it. Sometimes the pest control people dress it in a Red Sox uniform or a pair of sunglasses. This year it was naked but my girls loved it all the same.

When we arrived at the Wellfleet Motel and Lodge, the first thing my younger daughter did was run and smell the soap. We've stayed at this motel several times before, and to her, the smell of the motel soap harkens back to fond memories of summer vacations past. We all think she's a little strange for sniffing the soap, but she doesn't care what we think. She loves it. This year in fact, she hoarded seven bars to take home with her. She's hoping it will get her through the long Connecticut winter.

After my daughter was done sniffing the soap, we threw on our bathing suits and ran to the motel pool and hot tub for a dip. It's one of our favorite things to do. I keep telling the girls that someday we'll get a hot tub to call our own. That someday hasn't come...yet.

Our days were spent at the Cape Cod National Sea Shore. Here my daughters begged me to go body surfing with them in the icy cold surf. I did my best, trying to be a good father and all, but the ocean was way-way too icy and cold. We all retreated back to our beach blankets where the girls whined that they wanted to go back to the motel pool. I whined because I had spent $15 on beach parking.

At night we went to the Wellfleet Drive-In Movie Theatre. It is conveniently located right across the street from our motel. Going there is like travelling back in a time machine and the girls have a blast. We always bring pillows and blankets and stock up on junk food as we watch the nightly double feature. On Wednesday we watched "Monster House" and "Click." Friday we saw "Pirates of the Caribbean II" and "Shaggy Dog." The girls thought that these movies were pretty good, but they can't compare to their favorite movie... the "Intermission" film:

I actually love this song and can play it on the piano.....it was hard to read and sing it in my head at the same time!!!

sounds like you had a good time bobby:) Whats up with the soap fetish? love you Little Kelly

If your fond on rotary's and traffic.... Enjoyed your song improv and looks like you had a great vacation.

I'm jealous of the vacation...sounds like a good time was had by all. You know I love drive-ins...nothing beats outdoor viewing, popcorn, and bug spray!

We didn't even need the bug spray at the drive-in! In fact, it got so cool we had to pull out our blankets and sweatshirts. We had all of the windows and the sunroof open and even saw some shooting stars among the billion other stationary ones!!! Aahhh ...nothing like a good old Cape Cod vacation!

Just in case you were wondering, the "Big Blue Bug" has a name... Nibbles Woodaway! He has been featured in comic strips, has had cameo apprearances in movies such as Dumb & Dumber, he has appeared on Oprah and even been written up in the Wall Street Journal. Not too shabby for a big blue termite, huh?

P.S. He wears the Providence Red Sox hat, not the Boston Red Sox! Hence the "P".

Looks like we were both vacationing at the same time... We just got back from the very first Phillips family reunion out in Lake Tahoe. Vacationing with my kid only enhances the experience. She loves everything about it including the crap I hate (airports, rental cars, taxi's, etc...).

It was a lot of fun for me and the wife too.

Funny you mention the landmark thing. If you drive Northeast/Southwest on I85 between Greenville SC and the NC border you will pass through the town of Gaffney SC. Nothing but peach farms and fireworks stands. Gaffney has a water tower in the shape of a peach painted yellow and auburn, stem leaf and all. Funny thing is when you're heading North it looks like a peach, heading South it looks like a big red ass. The first time my wife saw it she laughed all the way through North Carolina.

Wow!!! I remember that peach water tower from a trip my family took to visit family friends in Greenville, South Carolina many years ago. Between that and Pedro announcing via hundreds of billboards that "South of the Border" was only so many miles away (every 5 miles or so from New Jersey on) with all kinds of funny slogans, including: "Keep yelling kids, they'll stop (which always elicited cheers from my siblings and myself)just totally cracked us up!

You gotta love that good ole' Southern humor and hospitality--there's nothing like it! (Although, I now hear that most of the slogans have been changed to make them more politically correct.)

If you go to this Roadside America website, you can find the Gaffney "Peachoid" (as it is known), as well as it's smaller sister in Alabama! (click on rival peach.)

You can also find the Big Blue Bug in Providence, RI as well as South of the Border's Pedro and other "kitschy" landmarks.

We used to always look for that while driving from the Cape to my grandparents house in Easton, CT.