NEW YORK POST
December 29, 2006 -- "ANIMAL House" boosted the careers of most of its young stars like John Belushi (Bluto), Kevin Bacon (Chip), Karen Allen (Katy), Tim Matheson (Otter), Tom Hulce (Pinto) and Stephen Furst (Flounder). But one of the brightest, Sarah Holcomb - who at 18 played the mayor's virginal 13-year-old daughter who passes out half-naked in the slovenly Delta frat house - tragically fell off the map. As Chris Miller, who co-wrote the screenplay of the 1978 comedy classic and penned the new book "The Real Animal House," relates to mrskin.com: "She was young, younger than the rest of us. We were a fast crowd. Drugs were everywhere. She fell into what, for lack of a better term, you would have to call bad company. And got [bleeped] up on drugs. Coke, primarily, if memory serves," Miller says. "[She] wound up in some home for [bleeped]-up young girls . . . wound up sort-of erased from life. I don't know what became of her. Sad story." Holcomb only made three more films before vanishing into obscurity after "Caddyshack."


My train had already made its final station stop and was pulling into the Stamford train yard when I spotted her; a lonely, pretty, thin blond woman in her mid 20’s. She was still seated in the middle of the train car when I approached her.

“Well…if you’re going to Westport, you should have transferred in Stamford for the train to New Haven.”

She suddenly raised her head and looked around. She finally realized that she was the only passenger left on the train.

“We’re in the train yard in Stamford,”

“Woo! Calm down.” I said. “It’s no big deal. My shift is over, I’ll just drive you back to the station and you can catch the next train to New Haven from there.”

The woman began sobbing uncontrollably. She told me that she had to get to Westport station now. She had someone waiting there for her and she couldn’t be late. If I had a cell phone at the time, I would have let her make a call, but this was about 18 years ago, BC (before cell phones).

“Listen,” I said, “don’t get upset. I drive through Westport on my way home, I’ll make a little detour and drop you off at the train station. I’m sure whoever is waiting for you will still be there.”

The tears that had welled up in this woman’s beautiful blue eyes were suddenly gone and she was now smiling. The extreme mood swings she had exhibited in this short conversation were amazing, and I began to have doubts about her mental health. She climbed into the front seat of my Honda Civic, and I began to wonder if my ride offer was such a great Idea.

“Hi, I’m Bob,” I said, as we pulled out of the train yard parking lot.

Something about Sarah was familiar, but I couldn’t quite put my finger on it.

“So Sarah…Do you live in Westport?”

“No, I’m staying here with some relatives.”

As we drove down I-95, I noticed that Sarah seemed anxious. I chalked this up to the fact that she was in strange car with a strange man. I tried to put her at ease with some small talk:

“What do you do for a living?”

Bingo! Like in the old cartoons, a little light bulb turned on over my head. I was slowly beginning to put the pieces of the Sarah puzzle together.

A few months previous to my conversation with Sarah, I had run into an old childhood friend of mine. He had recently been diagnosed as being bipolar, and had spent several weeks in a psychiatric hospital. He told me that a fellow patient of his, was a girl named Sarah. Sarah, he said, had starred as the mayor’s 13-year old daughter in the movie “Animal House,” and as Danny Noonan’s (Michael O’Keefe’s) girlfriend in “Caddyshack.”

I think my friend wanted me to be amazed by this revelation, but I was more amazed that I never realized that the same actress had played both of these parts.“Are you sure, that mayor’s daughter was played by the same actress as Maggie, Danny Noonan’s girlfriend in Caddyshack?”

I now looked over at the pretty blond girl that was seated next to me, and wondered if I should dare ask the question. I bit my tongue for a while and then …Ah, what the heck:

“Sarah” I asked, “by any chance…did you play the mayor’s daughter in Animal House?”

“Wow! She said, I’m surprised you recognized me.”

“And didn’t you also play Danny’s girlfriend in Caddyshack?”

“Yes! Yes I did…Not many people realize that I played both of those parts.”

“Yeah,” I said. “I have an eye for those kinds of things. I really liked your 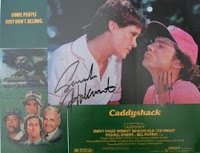 “Scottish!” She seemed insulted. “I wasn’t Scottish. I was Irish. Maggie O’Hooligan’s the name." She then went into character and recited her lines from Caddyshack. She concluded with…

She smiled and seemed to finally relax, that was until I asked if she had done any movies lately.

“No,” she said. “Acting jobs are hard to come by, and I’ve been dealing with a lot of personal issues lately."

I told her that she was certainly pretty enough to do modeling work and that she had beautiful eyes.

“Thanks,” she said, “and you have a cute smile.” The conversation was starting to get a little weird now, so I made sure that I mentioned that I had a fiancé in the next few sentences.

When we reached Westport Station she thanked me for the ride, grabbed her things and got out of my car. I watched as she walked up the stairs to the platform, where a woman (her mother, I presume) waited for her. Part of me had wanted to tell her about our mutual friend from the mental hospital, but then I thought it best to respect her privacy. It wasn’t till a few days ago, when I read the above story in “The New York Post”, that I decided her problems were public knowledge and I’d share this story.

Before writing today I googled her name and found this entry on the ACME animal house trivia website:


Sarah Holcomb's (Clorette DePasto) four-year film career ended with Caddyshack in 1980. She reportedly turned to alcohol and drugs and slowly lost touch with reality as she suffered from schizophrenia. The 2004 film Stateside is reportedly about her descent through alcohol, drugs, sexual abuse and finally mental illness. I am told she is now living a quiet, obscure life far from the madness of Hollywood under an assumed name and does not wish to be found.